Too Long a Sacrifice, Issue 3

Too Long a Sacrifice, Issue 3

Too Long a Sacrifice No. 3

As Odo forges a fragile working relationship with the past-his-prime investigator the Federation sent to help, new suspects emerge amidst a rising body count. But just when the team thinks they're getting close to the culprit, a shocking discovery changes everything!

A bomb has ripped through a restaurant on the Promenade called Lavin's Eatery, killing eight people and injuring dozens more. Odo's first suspect is Quark, but when a Bajoran called Keldan is found murdered, Garak also becomes a suspect. Three Ferengi trade delegates also die, poisoned, and the Federation assigns a Betazoid detective called Retlaw to assist Odo in solving the case.

Retlaw introduces himself to Odo by telling him a bit about himself. He recently escap the Dominion invasion of Betazed with his daughter and is worried about those left behind. He makes an offhand comment to Odo that the Jem'Hadar take their orders from Odo's people and wishes he could read Odo's mind to see why the Founders issue such orders. Odo replies that he doesn't know himself.

Focusing on the case, Retlaw comments that Odo is no further forward in his investigation. Retlaw notes that the Federation needs answers, as do the Bajorans and the Ferengi, of whom men are dead from both races. Odo wonders if Retlaw will simply be able to read minds and solve the case that way, but Retlaw comments that he isn't a walking mind scanner. There are also certain legalities about telepaths in law enforcement. Retlaw allays Odo's fears by stating that he has always followed Federation law in his career, despite his telepathic abilities, but he has been allowed dispensation in certain cases, like Odo's. Retlaw also comments that some individuals can convince themselves of their innocence, sometimes nullifying his telepathy.

Major Kira and Doctor Bashir call Odo to another crime scene. Two more Ferengi have been murdered, these two were to assist Odo in the investigation of the murder of their fellow Ferengi. Odo didn't know that these two men were coming to the station, indeed, their visit was classified. Retlaw suspects only someone familiar with station operations could have found out.

Retlaw and Odo begin to interview the suspects again, starting with Quark. Quark gets angry at being interviewed again and demands that Odo and Retlaw find whoever the culprit is who has been killing fellow Ferengi. Despite not being able to read Quark's thoughts, Retlaw is confident that Quark is innocent.

Next up are the two Nausicaans. Retlaw asks how they are smuggling contraband onto the station and, when he reads one of the Nausicaan's thoughts, he gets a name: Coleman Schroeder. Schroeder is a Starfleet ensign assigned to Ops. Odo and Retlaw interview him, with Captain Sisko present, and try to get him to admit he is working with the Nausicaans. Schroeder denies this, and also denies that he is helping anyone else smuggle contraband onto the station, and instead asks for legal counsel. Retlaw is unable to read Schroeder at all. Odo plans to investigate Schroeder's movements through his comm badge.

Garak meanwhile has information for Odo and Retlaw. Keldan, the Bajoran man who was murdered in the stabbing, and Vedek Teler both profited during the Occupation. Odo only knew about Keldan's shady past through what Vedek Teler told him, Teler obviously chose to lie about his own past. Garak also has footage of Vedek Teler meeting with Ensign Schroeder. Major Kira is unhappy that that Vedek Teler is a suspect, but Captain Sisko allows Odo and Retlaw to question the Vedek discreetly.

On their way to question Vedek Teler, Odo and Retlaw are targeted by the perpetrator, but the darts miss them. Retlaw comments that they must be getting close, with someone now trying to kill them. Odo tells Teler that they know he and Keldan were in business together and that they know that he met with Ensign Schroeder. Retlaw asks Vedek Teler for his thoughts. 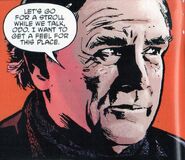