February 1972 & August 1974
"Too Many Presidents" was the fifth and final issue of John Byrne's Assignment: Earth miniseries. Published in September 2008, it featured Gary Seven and Roberta Lincoln protecting President Richard Nixon in 1972.

From solicitations
The President of the United States is the most powerful person on the planet—but what if the man in the office is an agent of a foreign government? Seven and Roberta journey to Beijing to make sure only Nixon returns from China! John Byrne's first-ever Star Trek series concludes here!

February 1972
Gary Seven and Roberta Lincoln protect Richard Nixon during his historic visit to China.
August 1974
Seven and Lincoln return from off-planet to hear a recording of Nixon's resignation speech. 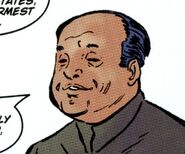