It is a time of political upheaval and uncertainty in the New Thallonian Protectorate. Following the brutal assassination of her husband, Si Cwan, former Starfleet officer-turned-newly-appointed-Prime Minister Robin Lefler must now face the growing danger and intrigue surrounding her newborn son and heir to the noble line of Cwan. Following a harrowing assassination attempt, Robin has no choice but to flee New Thallon with her child...seeking refuge with Captain Mackenzie Calhoun and the crew of the U.S.S. Excalibur and creating a major diplomatic crisis in Sector 221-G.

The political fallout between the Federation and the New Thallonian Protectorate pales, however, in comparison to the threat of an enigmatic alien race determined to seize the infant Cwan for its own mysterious purposes. But nothing could possibly prepare Calhoun for the shocking betrayal from within -- an act of treachery to aid and abet this alien race -- forever altering the lives of the Excalibur crew....

On an alien vessel, a Hermat struggles for consciousness as s/he tries to reach for the ship's control console, but hir body doesn't respond. S/he notices something big, like a ship, appear on the screen as s/he slips into the cold grip of death. 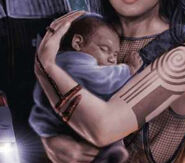 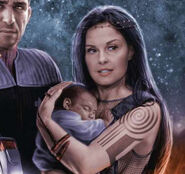 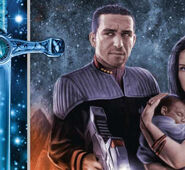 Retrieved from "https://memory-beta.fandom.com/wiki/Treason?oldid=646181"
Community content is available under CC-BY-SA unless otherwise noted.