A dark plan has been unleashed in the galaxy, a design so vast, only a collective - and ruthless - mind like the Totality could have conceived it. Now Captain Kirk must battle the seductive force of the Totality's will...

Now this unimaginable conflict could cost Captain Kirk his very soul, and bring death to the proud Vulcan. But in the unimaginable, lies their only chance, and the freedom of the galaxy depends on the outcome of the...

The Enterprise has been assigned to transport Ambassador Gailbraith to Zaran, where the native population has been subjugated by the Totality, a group of humans who fled Earth during the atomic wars and now form a collective unconscious. Gailbraith is part of a rival consciousness, the Oneness, which he sees as the future of humanity.

First, the Enterprise is redirected to pick up half-Zaran Federation Free Agent Sola Thane, who left Starfleet to try and free her people. She and Kirk are immediately drawn to each other but she also has a connection with Spock, triggering the pon farr in him which she mates with him to break. It becomes clear that the whole thing has been set in motion by Gailbraith and his opposite number in the Totality, Soljenov. The Totality hope that Thane will bond with someone and this will allow them to use her advanced psionic powers. 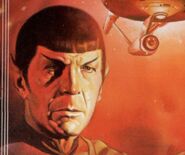 Retrieved from "https://memory-beta.fandom.com/wiki/Triangle_(novel)?oldid=645011"
Community content is available under CC-BY-SA unless otherwise noted.