Turn of the Tide

Turn of the Tide

2371
"Turn of the Tide" was the 32nd and final issue of Malibu Comics's 1993 regular series of Star Trek: Deep Space Nine comics. The issue consisted of a 30 page story, and 9 pages of features including a continued profile of Tom Riker that had been dropped from a previous issue. With the DS9 line credited as edited by Mark Paniccia, with issue edits by Phil Crain, the story was written by Chris Dows and Colin Clayton. Ten pages of art was penciled by Rob Davis and inked by Craig Gilmore, with the remaining 20 pages penciled and inked by Terry Pallot, who also lettered the issue. The issue color was designed by Mike Heilemann with color edits performed by the Malibu Colors studio team.

Prison Complex 187, a prison detention facility operated by the Bajoran Provisional Government in the year 2368 sets the scene located on a harsh planet blown by dusty winds under ruddy-colored clouds. Bajoran Militia troops use the complex's "Omega Wing" to detain Cardassians who were judged to be war criminals and due for execution.

The comic did not specifically explain how or where the Bajorans maintained such an organized military force or facility in the era of their world's occupation.

A group of prisoners organize an escape attempt, disabling a Bajoran prison officer who manages to raise the alarm by clubbing him with the butt of a stolen phaser pistol. The prisoners make a dash for the a Bajoran prison shuttle landed near the grounds of the complex.

A group of Bajoran guards was quickly assembled, cutting down many of the escapees with weapons fire from their Bajoran phaser rifles. While a few of the condemned prisoners gained access to the shuttle's ramp, most were cut down by the firing squad, with phaser rifles, set to kill. One of the escapees likened the Bajoran actions as killing the Cardassians as if they were gettle.

Gul Shyak was one of the lucky few to survive, although his brother Tomorok died in his arms on the ramp. Shyak in particular had vengeance in his heart, focusing on a ripped scrap of his brother's clothing that had been caught in his fist as the body fell away from the shuttle—a prison logo bearing a Galor Banner bisected with a death mark. Shyak vowed to avenge himself upon the Bajoran Militia, including the Bajoran who had captured him and wished his punishment to be execution—Major Kira Nerys.

The comic did not reveal any details of the role Kira had played in capturing or sentencing the Cardassians, making Shyak's motivations and hatred towards her somewhat mysterious.

2368
At the Bajoran-run Prison Complex 187, a group of Cardassian war criminals on death row stage a daring escape attempt. Bajoran Militia marksmen shoot and kill many of the escaping prisoners on the ramp of a Bajoran prison shuttle, but a few survive. One survivor is Gul Shyak, who watched his brother, Tomorok, killed the attempt
2371

This story did not explicitly state a time frame, however, it seems to have taken place in 2371, sometime after Sisko was promoted to captain, but before the arrival of Worf on the station in early 2372.

Although this was the last issue of the Malibu Comics run of regular series DS9 comics, the failing company would be publishing all Star Trek material that it had commissioned as a number of special features and one-shot issues at around the same time period. Malibu's new corporate owners, Marvel Comics, would later resume the DS9 license with new material and a new series, under a different licensing agreement with Paramount Pictures and Viacom.

The comic did not specifically explain how or where the Bajorans maintained such an organized military force or facility such as Prison Complex 187 in 2368, during the era of their world's bankruptcy and occupation. The story touched on the strange insignia the Bajorans used to mark their death row inmates, and indicated that it was ordered in part by Kira, but no detailed explanation of her involvement in the death sentences was given beyond the madman's statement that she was responsible. Kira's participation in a Bajoran Militia a year before the withdrawal is not necessarily contradictory, but neither has such a fact ever been indicated in any other work. To make sense with the Cardassian military presence in the Bajor system, one would probably have to assume the prison complex was operated in a different location by a sort of government-in-exile.

Perhaps due to editorial haste or the need to have licensing approval for large amounts of material in the month that Malibu ended publication, several sections of the comic have word balloons that were obviously done over by a different lettering artist. Most often changes like this are to prepare material for publication after an editor or licensee has requested changes to the story.

While the cover identifies this as a 48-page issue, there are 30 pages of story and 9 pages of features. Most US comic companies of the time only identified story pages as part of a cover page count, but this example includes advertisements and the cover itself as pages. 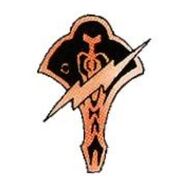 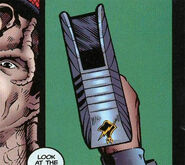 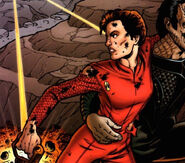 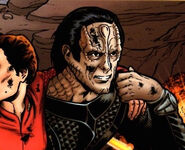