In issue one, "Slingshot," the most dangerous experimental vessel in the galaxy -- a prototype time ship -- has vanished, and it appears that the man who stole it is none other than Starfleet Admiral Edward Jellico. Only Mackenzie Calhoun and the crew of the Excalibur have a hope in finding him before the ship, intended purely for scientific exploration, is used to disrupt the space-time continuum.

Note this solicitation was published with the working title Slingshot, which was later changed to Turnaround. 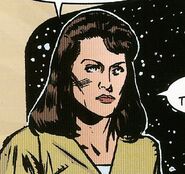 Morgan Primus
Add a photo to this gallery

Retrieved from "https://memory-beta.fandom.com/wiki/Turnaround,_Part_I?oldid=151995"
Community content is available under CC-BY-SA unless otherwise noted.