For other uses, see Voyager.

Throughout the history of the universe, there have been multiple timelines, alternate realities and parallel universes that have contained versions of the USS Voyager, as well as various duplicates. (VOY episode: "Deadlock", VOY novel: Echoes, VOY - Myriad Universes novel: Places of Exile) 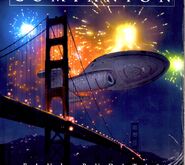 USS Voyager, from what is considered the primary universe.

Versions in the mirror universe.

USS Voyager_NCC-73602.
Add a photo to this gallery

In 2372, a spatial scission duplicated Voyager. Both vessels were out of phase with one another and occupied the same space. Ensign Harry Kim and Naomi Wildman transferred over before their Voyager self-destructed. (VOY episode: "Deadlock")

In the 31st century, a holographic recreation styled Voyager as a warship awas showcased in the Museum of Kyrian Heritage on Vaskan-Kyrian. (VOY episode: "Living Witness")

In 2374, the crew of Voyager allowed themselves to be copied by the Silver Blood species. The Silver Blood forgot their mimetic origins, and left their class Y planet with a duplicate Voyager they believed real. In 2375, the mimetic substance broke down, and Voyager and its crew dissolved. (VOY episodes: "Demon", "Course: Oblivion")

In a timeline where the Cardassians did not withdraw from Bajor in 2369, Voyager was destroyed by the Dominion in the Dorvan sector in 2373. (TNG - Myriad Universes novel: A Gutted World)

In a timeline were Voyager was crippled by Species 8472 in 2374, the ship remained in the Delta Quadrant and helped found the Delta Coalition. This crew learned of multiple timeline "sheafs" where Voyager endured the Year of Hell or continued on its route home. (VOY - Myriad Universes novel: Places of Exile)

Among the versions of Voyager enduring the Year of Hell in 2374, one reset the timeline when it crashed into the KIS Kyana Prime weapon ship. It left behind log buoys recovered by Prime-Voyager in 2382. (VOY novel: A Pocket Full of Lies)

In 2375 of an alternate timeline, Voyager crashed on a class L planet in the Takara sector. A majority of its crew perished, and Starfleet gave up the search for the vessel years later. It was rediscovered by Chakotay and Harry Kim in 2390. (VOY episode: "Timeless")

Later that year, rogue former Temporal Integrity Commission officer Braxton used a temporal disruptor to blow up Voyager. He was stopped by the crew of the USS Relativity. (VOY episode: "Relativity")

From 2380 onwards, various versions of Voyager and its crew appeared in local space due to the temporal anomaly crisis. This included crewmembers of Warship Voyager. (ST video game: Star Trek Timelines)

Retrieved from "https://memory-beta.fandom.com/wiki/USS_Voyager_(alternates)?oldid=658863"
Community content is available under CC-BY-SA unless otherwise noted.