The Original Series No. 21

2950.3
A mysterious music holds the clues that could save an alien race! — Uhura's Song is the 21st novel in Pocket Books' numbered series of Star Trek: The Original Series books, and was written by Janet Kagan.

Years ago, Lt. Uhura befriended a diplomat from Eeiauo, the land of graceful, cat-like beings. The two women exchanged forbidden songs and promised never to reveal their secret.

Now the Enterprise is orbiting Eeiauo in a desperate race to save the inhabitants before a deadly plague destroys them. Uhura's secret songs may hold the key to a cure - but the clues are veiled in layers of mystery.

The plague is killing Humans, threatening other planets—and Kirk must crack the code before the Enterprise succumbs!

The Enterprise has been called to the quarantined planet Eeiauo to deal with an outbreak of ADF syndrome, a plague locally referred to as "the long death." With McCoy heading up the medical team on the surface, Evan Wilson is assigned to the crew of the Enterprise as acting chief medical officer. The situation becomes more serious when the disease spreads to Humans, including Christine Chapel, and outbreaks occur all over the Federation.

Nyota Uhura, who once befriended an Eeiauoan named Sunfall, recalls a song she once sang for her that indicated her people originated on another planet and also referred to the plague, suggesting a cure might lie there. However, the Eeiauoans are reluctant to discuss the matter, but McCoy's assistant Quickfoot eventually admits the truth: Their ancestors were exiled from their home world, Sivao, two thousand years previous.

Using astronomical references in some of the older Eeiauoan songs, Spock and Uhura locate the planet. Kirk, Spock, Wilson, Uhura, and Chekov make contact with the inhabitants, the Sivaoans, who welcome the Enterprise crew but refuse to discuss the Eeiauoans, largely because of their guilt over their role in their exile. Wilson eventually realizes the Sivaoans view the Enterprise crew as children, which is why they are unwilling to discuss their shameful past the them, so the landing party volunteer to undergo the Walk, a native right of passage to be considered adults. They are joined by natives Jinx and Brightspot, who also wish to enter adulthood.

During the trek, Chekov begins to exhibit symptoms of ADF syndrome, which it turns out he is particularly susceptible to. Given that Jinx, an apprentice healer, had failed to recognize the Eaolauoan song about the plague, Wilson suggests Uhura sing the song in a different key, reasoning that Jinx's perfect pitch may have prevented her from recognizing the song after so many years of drift. Jinx eventually identifies a variation of the song, which refers to a disease the Sivaoans now consider a minor childhood ailment called "Noisy Baby," easily treated. Chekov is given the cure, which is made by Jinx, and the group reaches their destination, completing the Walk and adopting their adult names. Jinx chooses the name AnotherStarFreedom to- Eeiauo, and Evan Wilson shooses the name "Tail-Kinker to-Ennien" They also discover the reality of the Eeiauoans' "crime": They chose to live in cities rather than be nomads but doing so brought together diseases that wiped out some of the flora and fauna. Both parties have been ashamed of how they dealt with the situation ever since.

After informing McCoy of the cure, the Enterprise returns to Eeiauo with a number of Sivaoans who are eager to re-establish contact. Wilson is immediately reassigned, but when Kirk and McCoy try to contact her, they are instead confronted with a male Evan Wilson: The person using his identity while serving as acting chief medical officer the Enterprise during McCoy's absence, who also went by the Sivaoan name Tail-Kinker to-Ennien, was an imposter, a benevolent trickster whose real identity remains unknown, though her last message challenged Spock to find her. 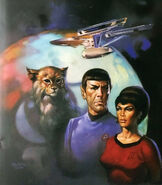 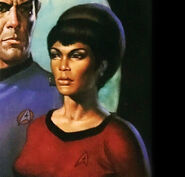 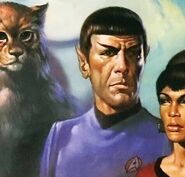