"We've determined that the Talaxians have fallen through the quantum fissure... and into a secondary dimensional plane"
—Captain Kathryn Janeway, 2372

"Under Ion Skies" was the second issue of Marvel Comics' 1996 series of Star Trek: Voyager comics and the continuation of the first issue. The issue consisted of a 22 page story written by Laurie S. Sutton. The art was pencilled and inked by Jesus Redondo, with Bobbie Chase credited as editor.

In the transporter room of the USS Voyager ionic lightning comes into contact with transporter's annular confinement beam and the transporter chief is unable to maintain the patterns of the rescued Talaxians, Neelix watches them vanish into a quantum fissure.

The ionized lightning rocks the bridge of the Federation ship when Commander Chakotay announces they have 30 seconds before a hull breach. Janeway orders Lieutenant Tom Paris to release the Talaxian ship and move them out of the storm. Unfortunately the control do not respond. Meanwhile the transporter chief informs Chakotay of the situation with the Talaxians. Janeway is satisfied with the fact that the Talaxians are no longer on their ship and orders Paris to engage the impulse engines.

As Paris maneuvers the storm Voyager manages to release its grasp on the Talaxian ship who is destroyed shortly after. Whit the ship released Paris is able to raise the shields back up. As they exit the storm, systems come back online. Janeway orders Lieutenant B'Elanna Torres to meet her in the transporter room as she leaves the bridge. Janeway and Torres investigate the transporter in hopes of discovering the fate of the Talaxian crew. They find that the ion discharges have compromised the phase transition matrix and damaged the molecular imaging scanners. Further tricorder analysis reveal ion decay win the Heisenberg compensators and if that energy came into contact with the confinement beam, it would be enough to create a quantum fissure. Thanks to decaying ion trails they can establish that the Talaxians have been transported to a secondary dimensional plane.

In the briefing room Janeway explains that Torres can re-open the fissure and send two people to the other side and that she is in need of volunteers. Neelix and Chakotay offer themselves despite Commander Tuvok's warnings. Janeway hands them two tracking devices to maintain constant transporter lock.

After transporting to the other plane, Chakotay and Neelix find themselves on a planet instead of the expected asteroid field of their plane. The world they finds is alive with energy arcs and humming crystals. Chakotay's tricorder reveals Talaxian life signs one kilometer away from their position and something else that he as never seen before but it disappears before he identifies it. As they make their way to the Talaxians position Chakotay can not shake the feeling of being watched. Those feelings quickly desipate when he and Neelix reach the top of a dune and see a crystal city.

Suddently a charge of energy rushes towards Chakotay sending him to the ground, Neelix tries to protect Chakotay by firing his phaser at the energy entity but it absorbs the beam from the weapon. Chakotay and Neelix try to run towards the city and as they do so Chakotay notices that their pursuers are herding them to a precise doorway. Once inside the building they find the Talaxians.

Back on the bridge Janeway grows suspicious at the fact that the Talaxians distress signal was meant for Voyager, so she asks Ensign Harry Kim to start a sensor sweep.

On the Ion planet Chakotay and Neelix resume the situation to captain Acrux before they notice that they are unable to transport back to Voyager. The tricorder reveals that there is a damping field around their location. Chakotay orders the others to go outside in order to transport but once outside they are confronted by the 3 ion entities. Chakotay notices a pattern in their sparking and adjusts is tricorder to emit a series of photon pulses and electric currents in hopes of communicating with the entities, which he does.

After a while they are permitted to transport back to Voyager as Chakotay explains that they were trying to protect them from the dangers of their world and the only safe place for organic beings was inside the crystal city.

When they transport back to the ship, Tuvok and some security officers are there, but before anything can be said or done the Talaxians pull out weapons and take Chakotay and Neelix hostage. Surprised Chakotay asks for an explanation. Tuvok tells him that a sensor sweep revealed the presence of a Trabe ship hiding in the sector. At this point Acrux reveals that they are a group of mercenaries hired by the Trabe to steal Voyagers technology... 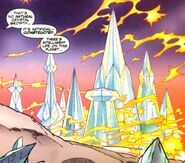