unknown
"Under the Sea" was an 18-page Star Trek: The Original Series comic strip published in 1970. It was the 16th story arc in the UK comic strips series, released in six parts within issues of TV21 Weekly. This was the last of four stories drawn by Mike Noble. In this story, the Galileo searches underwater for a missing survey ship.

Omnibus teaser
Kirk's crew investigates the disappearance of a Federation survey expedition to Tekkor, whose population moved beneath the sea nine centuries prior when a storm flooded all surface land.

Aboard the Galileo, James T. Kirk, Pavel Chekov, Smith and three other crewmen search the water world Tekkor for wreckage of Survey II, which vanished two months earlier. When the Galileo reaches the site of the surveyor's final transmission, a massive red octopus monster emerges from the ocean and grabs the shuttlecraft in mid-air. Kirk electrifies the hull, shocking the animal into releasing them, but the Galileo plummets wildly into the sea.

After they regain control of the ship, they head for the sea floor to search for wreckage, traveling deep enough that the sea blocks communications with the USS Enterprise. They suddenly spot more octopus monsters. But as they evade them, ice forms around the Galileo. It is dragged through an airlock into a hangar next to the missing survey ship. Kirk's crew disembark and locate the survey team nearby in stasis chambers. Armed Tekkorians approach, and one of the crewmen holding a phaser rifle instinctively fires at them, thinking they are about to shoot. Eventually, Kirk's group is captured.

Early the next day, Spock takes shuttle NCC-1701/8 alone on a rescue mission. He comes upon an underwater battle between octopus monsters and several Tekkorian sea-snakes. One of the sea-snakes wrecks a nearby mounted cannon and stuns the two Tekkorians manning it. Spock quickly acts to rescue the humanoids, who explain that they'd rescued the human surveyor crew after their ship was damaged by sea-snakes, and they were recovering in a hospital. Unfortunately, Kirk's team thought the Tekkorians were hostile and had no universal translators to clear up the misunderstanding. Spock quickly takes his shuttle underwater.

Meanwhile, Kirk's team has escaped and is engaged in a firefight. One of the Survey II crewmen awakes from stasis and intercedes in the battle, telling Kirk that the Tekkorians are friendly. When Spock arrives, Kirk borrows his translator and establishes friendly relations. As the two shuttles return to the Enterprise, he hopes the way was paved for a future alliance with the Federation. 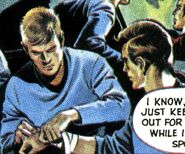 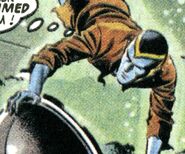 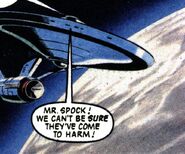 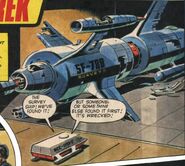 Survey II in a hangar bay. 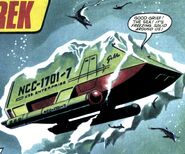 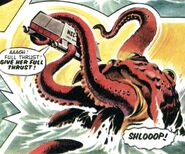 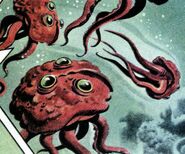