"Unimatrix Zero" was the 46th and 47th episodes of Star Trek: Voyager, a feature length cliffhanger episode of the show's sixth and seventh seasons that was released as two parts, first aired on 24 May 2000 and 4 October 2000. The episode story was written by Mike Sussman, Brannon Braga & Joe Menosky, installments directed by Allan Kroeker and Mike Vejar. The crew of the USS Voyager discover dissent within the Borg Collective when Seven of Nine finds herself dreaming of Unimatrix Zero—an idyllic environment populated by drones blessed with a mutation that allows them to experience individuality.

Seven of Nine's regeneration cycle is disturbed by what seems to be dreams, but in one such experience, she is told that they are not dreams at all. A man named Axum tells Seven that she is connected with a virtual construct known as Unimatrix Zero, a sanctuary populated by Borg who can exist within it as individuals while/when they are in their regeneration cycles. Only one in a million drones have this ability, but the Borg Queen is systematically deactivating all mutated drones via their interlink frequency. A nanovirus will mask them, but when their regeneration cycle is over, the drones have no memories of Unimatrix Zero, and Seven is asked to introduce this virus. 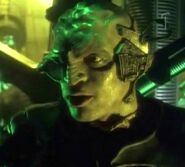 Retrieved from "https://memory-beta.fandom.com/wiki/Unimatrix_Zero_(episodes)?oldid=500950"
Community content is available under CC-BY-SA unless otherwise noted.