This male led a village that was under the control of Molor, which couldn't provide the tribute required of it. He informed Kahless, who was there to collect tribute, that they couldn't pay. He helped Kahless with his wounds after Kahless refused to burn down his village and killed Starad, son of Molor. (TNG novel: Kahless)

This warrior served in the army commanded by Kahless that was sent to collect tribute from a village that couldn't pay. When Kahless and Starad, son of Molor got into a fight over whether to burn down the village or not, this warrior tripped Kahless. Kahless killed him in revenge. (TNG novel: Kahless)

This warrior was killed by Kahless during a battle. (TNG novel: Kahless)

This warrior was killed by Kahless as he fought in the anteroom of Molor's keep. (TNG novel: Kahless)

This warrior was disembowled by Morath in the anteroom of Molor's keep. (TNG novel: Kahless)

This spearman was killed by Kahless as he charged up the stairs of Molor's keep. (TNG novel: Kahless)

These two Klingon guards served at the Klingon High Council. In 2156, they escorted Jonathan Archer and T'Pol to their meeting with the High Council on behalf of the United Earth government. (ENT novel: Beneath the Raptor's Wing)

On stardate 2261.234, a quantum rift in the Campor system pulled incarnations of the starship USS Enterprise from parallel universes into an unknown region. During the event, three male Klingon Starfleet officers – an operations division ensign, a science officer lieutenant and a command division commander - materialized briefly on the USS Enterpriseparallel alternate reality. Unaware that they had left their own Enterprise, these officers fired their phasers at Commanders Spock and Spock and Lieutenant Nyota Uhura. The Klingons vanished seconds later. (TOS - Parallel Lives comic: "Part 2")

In 2266, a group of Klingons lured the USS Enterprise to Beta II with fake ore deposits so they could capture Captain James T. Kirk and replace him with a duplicate. However, the Enterprise crew mutinied against the duplicate Kirk and pursued him when he fled to Beta II, where they exposed the Klingon plot and rescued the real Kirk. (TOS comic: "The Enterprise Mutiny") 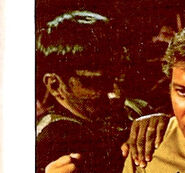 Klingon soldier.
Add a photo to this gallery

Kang's crew was decimated by the Beta XII-A entity, with the remainder joining his landing party to the moon and the rest being captured off their cruiser. (TOS episode & novelization: Day of the Dove)

These two sergeants hauled Korax back to his ship after he got drunk and passed out with Montgomery Scott. (TOS novel: Dwellers in the Crucible)

These two soldiers helped Krazz and Kalor guard Warrantors of Peace who had been kidnapped. They were removed from the planetoid the prisoners were on by Charvanek. (TOS novel: Dwellers in the Crucible)

These two Klingons lived on the planet Sanctuary in a camp with others, including a Tellarite, an Orion, a Gorn, and three Humans.

This band of survivalists lived outside the villages on the planet and once captured James T. Kirk, Spock, and Leonard McCoy. The Klingons distrusted the people they captured and followed them to ensure they had left the camp completely. (TOS novel: Sanctuary)

The Commander was a Klingon male of the mid 24th century, the captain of the IKS Kothulu. By 2365, the Commander had been held in such high esteem in Klingon society that he was rarely addressed by his name, but instead by his rank.

In 2365 the Kothulu picked up Kreel activity on the planet DQN 1196. The Kreel had discovered a cache of advanced weaponry left on the planet by the Cognoscente. They used these weapons to first attack the landing party sent to investigate their activities, then to attack the Kothulu itself, severely damaging the vessel in the process. Realizing that he had a duty to live and inform the Empire of the Kreel's acquisition of advanced weaponry, the Commander ordered a retreat from DQN-1196.

After repairs were made to the Kothulu, the Commander was ordered to take Ambassador Kobry to a rendezvous with the USS Enterprise-D, so that diplomatic talks could begin with the Kreel. While en route to meet with the Enterprise, the Commander held a private meeting with Kobry in which he insinuated to his first officer Tron that Kobry should be assassinated. This way the Kreel would be blamed for Kobry's death, the peace talks would break down, and war could continue with the Kreel.

Fortunately Kobry survived Tron's attack. Kobry informed Captain Jean-Luc Picard that Tron would be dealt with, and that the Commander would probably also have to answer for his role in the assassination attempt. (TNG novel: Strike Zone)

This male actor acted out the part of Kahless in a reenactment of the battle between Kahless and Morath, held in the village of Tolar'tu. He, as was expected, defeated the actor playing Morath. (TNG novel: Kahless)

This male actor acted out the part of Morath in a reenactment of the battle between Kahless and Morath, held in the village of Tolar'tu. He, as was expected, was defeated by the actor playing Kahless. (TNG novel: Kahless)

This warrior was in the crowd at a reenactment of the battle between Kahless and Morath in the village of Tolar'tu. He shouted at Unarrh, son of Unagroth, a Klingon councillor, about the scroll that claimed all of the myths about Kahless were not true. (TNG novel: Kahless)

This warrior was in the crowd at a reenactment of the battle between Kahless and Morath in the village of Tolar'tu. He shouted at Unarrh, son of Unagroth, a Klingon councillor, about the scroll that claimed all of the myths about Kahless were not true. (TNG novel: Kahless)

This woman was in the crowd at a reenactment of the battle between Kahless and Morath in the village of Tolar'tu. She shouted at Unarrh, son of Unagroth, a Klingon councillor, about the scroll that claimed all of the myths about Kahless were not true. (TNG novel: Kahless)

This woman worked at a very discreet bar in the village of Tolar'tu serving food and drink. She caught Emperor Kahless's attention when she was serving him his food. (TNG novel: Kahless)

This member of the Klingon High Council conferred with Chancellor Gowron before Emperor Kahless entered to confer with Gowron. (TNG novel: Kahless)

This Klingon was a scientist from the Klingon Science Institute who was responsible for supervising Korath during a tour of Federation science facilities. (DTI novel: Watching the Clock)

At an unknown date a Klingon boy and his grandfather went on a Targ hunt in the jungles of Qo'noS, the boy's first hunt. The grandfather provided instruction to the boy to let the hunt progress ucessfully, and even allowed the boy to use his mek'leth for the final kill. The evening of the kill, while they sat by their campfire in the cave the targ was killed in, the boy recounted the tale of his kill to his grandfather. The grandfather chastised the boy for exagerating the events of the hunt and his actions, and told him the Story of Gorath to illustrate why he should not boast about his accomplishment but be proud of what he had truthfully done. (ST episode: "The Young Hunter: A Klingon Folktale")

Retrieved from "https://memory-beta.fandom.com/wiki/Unnamed_Klingons?oldid=662061"
Community content is available under CC-BY-SA unless otherwise noted.