This is a list of examples of Nebula-class starships that do not have names immediately specified in this database.

In 2378, some derelict Nebula-class starships were found in orbit around the planet Geble III, where both the USS Nightingale and USS Sovereign arrived to rescue the derelicts' escape pods. (ST video game: Bridge Commander)

No final fate is established for this vessel as its name was randomly selected for a Nebula-class vessel by the game software.

In a permutation of the mirror universe where the Alliance held the galaxy in the chokehold, three Nebula-class ships were part of the fleet chasing the insurgent Excalibur. Two of these Nebulas were adorned with the Imperial logo on the prow, and yellow markings on top and bottom of the saucer section, while one Nebula-class ship appeared unadorned. Their deflector dish was yellow. The fleet failed to prevent the Excalibur's escape into the primary universe through an interdimensional rift. (NF - Turnaround comic: "Part V") 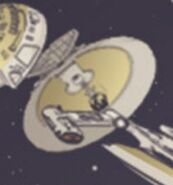 A Nebula-class vessel arrived carrying part of a delegation of Federation diplomats and dignitaries gathered on Deep Space 9 in 2371 to greet Grand Gul Ekhart for a peace summit. The invitation was a ruse, however, resulting from complicity from Ekhart and a terrorist, Gul Shyak, who planned to destroy Bajor and all vistors to the Bajor system with an asteroid containing a protomatter bomb and metagenic weapon seed.

The assembled starships were able apprehend Shyak and Ekhart after a pirate vessel (unnamed pirate transport) piloted by Miles O'Brien and Odo recovered Kira Nerys and Skrain Dukat from the asteroid and detonated the weapon in the Seyom system. (DS9 comic: "Turn of the Tide")

A Nebula-class ship underwent a baryon sweep at the Remmler Array in 2369. (Ships of the Line 2010)

Lieutenant John Teska captured an image of a Nebula-class ship keeping station outside an Earth Spacedock-type space station. (Ships of the Line 2002)