This is a list of unnamed Federation and Terran Empire starships of the Nova-class.

On 9 January 2367, the wrecked saucer section of an unnamed Nova-class ship was retrieved by a Starfleet utility vessel, eight days after the disastrous Battle of Wolf 359 against Locutus's cube. (SOTL calendar: Ships of the Line 2015)

In a permutation of the mirror universe where the Alliance held the galaxy in the chokehold, four Nova-class ships were part of the fleet chasing the insurgent Excalibur in the 2370s decade. These Novas were adorned with the Imperial logo on the prow, and yellow markings on top and bottom of the saucer section. Their deflector dish was yellow, too. The fleet failed to prevent the Excalibur's escape into the primary universe through an interdimensional rift. (NF - Turnaround comic: "Part V") 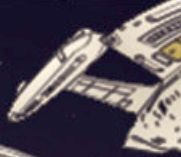 Shortly after stardate 58130.6 in 2381, Commander Mandel of Starfleet Security and his team travelled to Lapeeria in the Laap star system aboard a Nova-class starship. The vessel rendezvoused with the USS Cerritos, where Commander Mandel arrested Captain Carol Freeman on suspicion of conspiracy with Klingon extremists to orchestrate the destruction of Pakled Planet. Mandel and his team returned with Freeman to their ship before warping out of the system. (LD episode: "First First Contact")

Battle against the Borg[]

On stardate 59844.9 in the year 2382, an unnamed Nova-class science vessel was part of a combined Federation-Borg fleet massing to combat the Voldranaii. The extra-dimensional invaders were a ruse created by the Borg Queen, who then ordered to destroy the Federation fleet. The Nova-class starship took fire from a Borg tactical cube and was heavily damaged. (TNG - Hive comic: "Hive, Issue 3")

In an alternate timeline where the Delphic Expanse expanded unhindered, a Nova-class vessel participated in the Battle of Procyon V between the Federation and the Sphere Builders. (ENT episode: "Azati Prime")