This is a list of unnamed Federation and Terran starships of the Prometheus-class.

In a permutation of the mirror universe where the Alliance held the galaxy in the chokehold, three Prometheus-class ships were part of the fleet chasing the insurgent Excalibur in 2379. These Prometheus were adorned with the Imperial logo on the prow, and yellow markings on top of the saucer section. Their deflector dish was yellow, too. The fleet failed to prevent the Excalibur's escape into the primary universe through an interdimensional rift. (NF - Turnaround comic: "Part V") 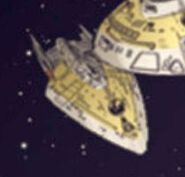 In the 26th century, a ship of this class participated in the Battle of Procyon V, against the Sphere Builders and their Temporal Liberation Front allies. (ENT episode: "Azati Prime")

Retrieved from "https://memory-beta.fandom.com/wiki/Unnamed_Prometheus_class_starships?oldid=670259"
Community content is available under CC-BY-SA unless otherwise noted.