This is a list of unnamed Federation and Terran starships of the Sovereign-class.

In 2374 and 2375, deposed Emperor James T. Kirk of the Terran Empire intended to duplicate the captured USS Enterprise-E and its first copy, the ISS Enterprise-E, in the Goldin Discontinuity in the mirror universe, in order to defeat the Klingon-Cardassian Alliance with a fleet of Sovereign-class starships. (TOS - Mirror Universe Trilogy novels: Spectre, Dark Victory)

By 2380, the Starfleet had access to no more than fifteen Sovereign-class starships, including the USS Enterprise-E. Zelik Leybenzon noted that fact when countless Sovereigns from other quantum realities appeared through a quantum fissure at Gorsach IX. (TNG novel: Q & A)

In a permutation of the mirror universe where the Alliance held the galaxy in the chokehold, four Sovereign-class ships were part of the fleet chasing the insurgent Excalibur. These Sovereign were adorned with the Imperial logo on the prow, and yellow markings on top and bottom of the saucer section. The location of these markings varied. Their deflector dish was yellow, too. The fleet failed to prevent the Excalibur's escape into the primary universe through an interdimensional rift. (NF - Turnaround comic: "Part V") 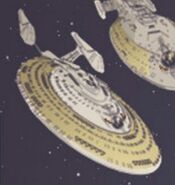 In one permutation of the Kelvin timeline, the Klingon Empire responded to the Federation's diplomatic overtures to the Dominion invading from the Gamma Quadrant with war. At least two Sovereign-class starships took part when Starfleet made its last stand against the Klingons at Wolf 359 in the 2330s or 2340s decade. Klingon birds-of-prey destroyed both ships, and Starfleet lost. (TOS - The Q Gambit comic: "Part 2")

In one permutation of the mirror universe, purple Sovereign-class assault cruisers were part of Captain James O'Brien's fleet harassing civilians and trade lines during incursions into the primary universe in 2409. (STO mission: "Defend the Beta Ursae Sector Block")

In another permuation, yellow-clad Sovereign-class star cruisers assaulted Vauthil Station and as part of a Terran invasion. They were repelled alongside the rest of the Terran fleet by a flotilla of Allied ships. (STO mission: "Mirror Invasion")

From 2409 to 2411, the red-coated Sovereign-class ships of Admiral Leeta also attacked Vauthil Station and the Badlands region, and were repelled by a squadron of Alpha Quadrant Alliance ships. (STO missions: "Mirror Invasion", "Badlands Battlezone")

Retrieved from "https://memory-beta.fandom.com/wiki/Unnamed_Sovereign_class_starships?oldid=670260"
Community content is available under CC-BY-SA unless otherwise noted.