June 2381
Unworthy is a Star Trek: Voyager novel by Kirsten Beyer published by Pocket Books in 2009. It is the second novel in the Voyager relaunch after Destiny and the sixth overall. It centers around the Full Circle Fleet making contact with a collective known as the Indign.

Freed with a thought, the greatest menace to humanity, the Borg are gone, absorbed into the Caeliar gestalt. But are they? Can this deadly menace, that has hovered over humanity for decades truly be gone? Might some shadow of the Caeliar remain? The Federation decides that they have to know and Starfleet is ordered to find out.

The Starship Voyager leads a fleet into a region of space that has lived in fear of instant annihilation for generations, home of the Borg, the Delta quadrant. Afsarah Eden—the new captain of Voyager is charged getting answers, to reach out to possible allies, and resolve old enmities in the Delta quadrant

The perfection that was given to the Borg was withheld from Seven of Nine. Left behind she is living a twilight existence—neither Borg nor human—and slowly going mad. The whispers of the Collective, comforting mummers she has always known, is replaced with a voice deep within her that keeps insisting she is Annika Hansen. Chakotay, the former captain of Voyager, offers to help Seven rendezvous with the ships that Starfleet Command has sent into the Delta quadrant, the probable destination of the mysterious Caeliar.

These are not the friendly stars of the Federation, the unknown and the unexpected are the everyday.

In 2381, following the Borg Invasion and the species’ subsequent absorption into the Caeliar gestalt, Seven of Nine continues to recover from the traumatic replacement of her Borg implants with Caeliar catoms when her Aunt Irene dies, after a long struggle with Irumodic Syndrome. When Seven withdraws into herself from the trauma of recent events, Chakotay recruits Icheb and his old friend, Sveta, into a ritual which allows them to enter Seven’s mind and convince her to return to the real world. Resisting a mysterious voice which insists she is Annika Hansen, Seven embarks with Chakotay to rendezvous with the Project Full Circle fleet in hopes that finding the Caeliar might answer her remaining questions.

Meanwhile, B'Elanna Torres, having faked the death of herself and her daughter Miral Paris, takes her custom-built shuttle to the Delta Quadrant in the final leg of her three-year long effort to convince the Warriors of Gre'thor that she and Miral are dead. A minor malfunction in her ship's slipstream drive forces B’Elanna to rendezvous with her nearest ally – Neelix – and she must inform her old friend of the death of Kathryn Janeway.

The Full Circle fleet disembarks for the Delta Quadrant, and soon after arriving – at the site of the transwarp hub destroyed by Voyager in 2377 – discovers B’Elanna’s shuttle under attack from a vessel resembling a Borg cube. A shocked Harry Kim, though relieved to learn B’Elanna and Miral are alive, feels betrayed by the deception of Tom. Soon, events force Tom and B’Elanna to change their plans and decide to remain aboard Voyager.

As half of the fleet departs to follow-up on a discovery by the USS Aventine during the Borg Invasion, Voyager, Galen, and Hawking investigate a nearby system from which the strange cube-shaped vessel originated and which might offer the fleet valuable benamite to repair their own malfunctioning slipstream drives. The system turns out to be home to six sentient races – living in a cooperative, symbiotic society – which show little interest in Captain Afsarah Eden’s diplomatic efforts or requests for benamite. Simultaneously, an away team investigating another of the alien vessels makes a horrifying discovery: the aliens use their cube ships to make offerings of other species to the Borg. While the crew digests the strange behavior of the alien races, Captain Eden also learns that deflector protocols which could open a rift into fluidic space have been mysteriously restored – and Admiral Willem Batiste suspects Seven of Nine or Chakotay might be responsible.

When the aliens – identified collectively as the Indign – send a small canister to the fleet, it remains sealed until the voice in Seven of Nine’s head gives her the ability to open it. Immediately, an alien presence from within possesses the Doctor’s nurse, Meegan McDonnell and expresses the Indign’s desire for the fleet to leave their system. After Chakotay, Counselor Hugh Cambridge and the Doctor help Seven deal with the voice, she experiences a vision of a group of aliens not participating in the Indign collective. When Voyager suffers from a plethora of systems failures, the ship shows signs that it is moving out of the system to open a rift into fluidic space but Nancy Conlon and B’Elanna manage to regain control of the ship in time to avoid this outcome.

When Seven, Chakotay and Cambridge visit an isolated Neyser colony, they discover that the aliens have been attacked with Starfleet weapons. Seven is drawn deeper into the colony to encounter the Old One who telepathically warns Seven of the canister’s true nature. Simultaneously, Voyager is hijacked once again and used to open a rift into fluidic space forcing Eden to realize that the traitor is her own ex-husband, Admiral Batiste. As the rift widens, Eden confronts Batiste and learns that he was a sleeper agent for Species 8472 for the invasion that Voyager had negotiated a truce to avoid five years earlier (VOY episode: "In the Flesh"). While Chakotay negotiates with Valerie Archer, the Species 8472 agent he dealt with preceding the truce, Eden allows Batiste to return to his people. Meanwhile, Reg Barclay – one of few who knew that Meegan McDonnell was actually an advanced hologram – realizes that the Indign consciousness never truly left her program and tries to apprehend her before she does further damage.

After Chakotay convinces Archer to return Batiste to fluidic space, Meegan escapes and Seven explains what the Old One revealed – the memory engrams of eight immortal, and incredibly dangerous, Neyser were imprisoned in the canisters which Meegan stole after attacking the isolated Neyser colony. When the Indign arrive to attack the Full Circle fleet, Seven uses her catoms to access the Indign consciousness and dissuade them from attacking by lying about the status of the Borg. In the end, the Old One promises to share the truth of the Borg’s evolution with the Indign and Seven manages to make peace with the voice – which the Caeliar had left to facilitate her adjustment.

As Eden is promoted to replace Batiste as fleet commander, Chakotay is offered the captaincy of Voyager, B’Elanna is promoted to fleet chief engineer to oversee the slipstream technology, and B’Elanna and Nancy recruit Counselor Cambridge to help Harry and Tom reconcile. 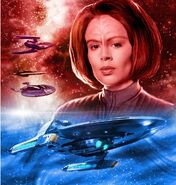 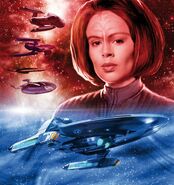 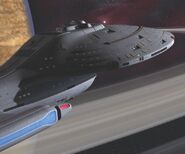 The novel runs from May through June of 2381, the first month of the Full Circle Fleets 3-year mission in the Delta Quadrant. It begins three years and six months after the final Star Trek: Voyager episode, "Endgame".