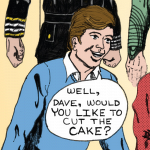 I mainly focus on writing articles for older TOS material, such as the manga, Rostler young adult short stories, comic strips, and TAS.

The most complicated single article so far was TAS novelization: The Slaver Weapon, because it's an adaptation of an episode that itself was adapted from a short story. It meant reading two novels, Star Trek Log Ten and World of Ptavvs, Larry Niven's novel which introduced the Slavers. Other sources were the episode itself, Neutron Star (Niven's short story collection containing “The Soft Weapon,” from which the episode was based), Barlowe’s Guide to Extraterrestrials (a 1979 speculative fiction sketchbook which devoted a page to the Slavers), the episode's final draft script (7/23/73), and an interview with Alan Dean Foster in The Fifty-Year Mission, Part 1.

I'm also proud of many of the articles covering the US Comic Strips series. I'd seen a handful of them back in the 80s, but hadn’t read the stories until they were beautifully collected by IDW's imprint The Library of American Comics. For more perspective on the era when the strips took place, the second five-year mission, I've reread TOS novel: Ex Machina, the TMP-era Untold Voyages comics, TOS reference: Phase II: The Lost Series and the Mere Anarchy novels.

Retrieved from "https://memory-beta.fandom.com/wiki/User:Meacott?oldid=580310"
Community content is available under CC-BY-SA unless otherwise noted.