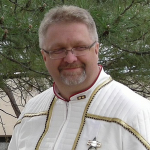 A Star Trek fan since the late 70's when my father introduced me to the series. I am now raising my own next generation of Star Trek fans with my lovely wife Erica. I am currently the Chief of Operations as a "Rear Admiral" of the Star Trek Parent Organization, Starfleet Command's Seventh Fleet. Prior to my promotion at the start of 2011 I spent 13 years as the "Commanding Officer" of the USS Ticonderoga Star Trek fan club in Ogden, Utah. I first became involved with organized Star Trek fandom on September, 1991. I have also been attending conventions since the late 80's and helped run a few cons in Utah. I have also written newsletter articles for various fan clubs since the early 90's and edited several newsletters along the way. I am a Treknologist (a person who is fascinated and studies technology seen in Star Trek).

I am also a fan of other SF/F universes including Dune, Foundation, Star Wars, Stargate, Firefly, LOTR and more. I'm also a World War II history buff and love playing some of the older video games from the 2000s (No One Lives Forever, Tron 2.0, Star Trek Elite Force, Jedi Knight series, etc.).

My goal with this Wiki is to accurately report on various entries from licensed works, without plagiarizing the works provided to Star Trek fans.

Retrieved from "https://memory-beta.fandom.com/wiki/User:TardisCaptain?oldid=517828"
Community content is available under CC-BY-SA unless otherwise noted.