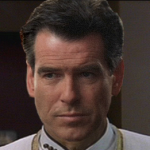 Records indicate he was born on in 1983, though there has been some dispute over this date. His birthplace, and most other facts from his early history have been lost to the mists of time and bureaucratic asininity. However, what is known is that he has lived most of his life in the state of Maryland, neighboring the state of Absolute Confusion. Reports of his birth in Northern Ireland have recently been verified.

He was a second-generation Trekkie (preferring that term over Trekker), inheriting the unfortunate condition from his mother and taking it to uncharted heights of unhealthy obsession. He prided himself on the fact that he was one of the last people to become a fan of Star Trek before any of the spinoffs. That was in September, 1986, a full year before The Next Generation aired for the first time. He regretted that his first-remembered exposure to Trek was "Catspaw" (TOS), but nonetheless was glad that his three-year old brain overlooked the inanity and became enamored with phasers, tricorders, and Spock's ears.

In the years following, he became known among his friends - and even total strangers - as a font of knowledge of all things Trek, and film lore in general. His obsession for Trek was rivaled only by his (longer-standing) geekdom for Sherlock Holmes, and his late-coming-but-still-way-off-the-deep-end dive into Lord of the Rings fandom.

Flesh of my Flesh
Add a photo to this gallery
Retrieved from "https://memory-beta.fandom.com/wiki/User:TimPendragon?oldid=682861"
Community content is available under CC-BY-SA unless otherwise noted.