Paramount Digital Entertainment has announced a brand new Star Trek game called simply Star Trek, just like the most recent movie. It is set to release in the summer of 2012 and is being developed by Digital Extremes, previously known for Dark Sector and The Darkness II. The game will be shown at next week's E3 Expo in Los Angeles.

The game will be set in the alternate timeline featured in the recent J.J. Abrams movie and will continue the story of that version of the Enterprise crew. The players will be able to control either James T. Kirk or Spock in both single player and co-operative modes. 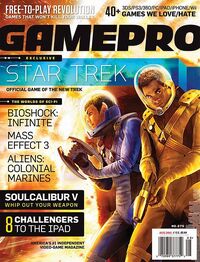 I'm sure many fans will appreciate the game as they await the upcoming, long-delayed sequel to the last movie. Personally, the kind of game I'd love to see the most would be another title akin to Starfleet Command or Birth of the Federation. How about you?

Read more about the upcoming game in this month's copy of GamePro Magazine!