Star Trek and the Legion of Super-Heroes 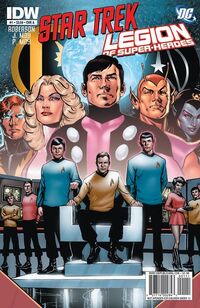 Just announced at this year's Comic-Con, DC Comics will be teaming up with IDW Publishing to create a new Star Trek comic book entitled Star Trek—Legion of Super-Heroes. This series will be headed by writer Chris Robinson and the art will be done by Jeffrey and Phillip Moy. They also have have a list of artist prepared to do variant covers including Keith Giffen, Mike Grell and Steve Lightle.

Bob Harras, who is DC Comics Editor-in-Chief, was quoted as saying ""We're thrilled to be joining such iconic characters together in an exciting adventure that spans space and time."

What are your feelings about this new comic? Is it something that you are going to be interested in? If so, the comic is set to release in October.