From solicitations: From the creative team who brought you Klingons: Blood Will Tell! This issue begins an all-new five-part adventure for the Enterprise-D crew! The Enterprise is summoned to a Federation science station, designed to be the ultimate in data storage and information archiving. Data and Riker enter the outpost's gargantuan artificial intelligence system, which may have gained sentience and has begun behaving erratically, with orders to either repair or destroy it. On the Enterprise, meanwhile, Picard and the crew begin to realize that there may be more here than meets the eye...

William T. Riker is flying a World War II era P-38 Lightning plane when Data contacts him and tells him that the Captain is expecting them. He saves the program as "Riker 1944", climbs out onto the wing and approaches the archway exit to the holodeck.

They head to meet Picard who tells them that he wants them to visit Daystrom One, the Federation's new information archive. The engineers there are having issues with the artificial intelligence in charge of the installation. The artificial intelligence there is based on the same technology as Data's positronic brain, and the directors of the project hope that he can help. Data confirms that he was consulted during the design of the system.

"First officer's log, stardate 45915.3. Commander Data and I are preparing to beam down to Daystrom One. While we have received some preliminary reports on the nature of the problem, we both look forward to finding out more from the facility's engineers."

Upon their arrival, they are taken to meet Admiral Kebal and told that the aim of the project is "create a secure archive of the accumulated knowledge of the Federation" and that it is a prototype for more such facilities. The project manager, a Benzite named Mendock, tells them that they're using holodeck technology to create an extra-dimensional tesseract and that the AI began behaving erratically almost two weeks ago. An Andorian informs Data that they need his expertise to regain control and that Data is authorized to shut down the AI if that is required. Data expresses his reluctance, especially if it has achieved sentience. Riker and Data are then taken to the tesseract gateway to get into the archive, an area called the "data landscape" by the Bynars.

As Data and Riker take an access pod through the archive, they discuss what they might do if the AI has, indeed, achieved sentience. Their discussion is interrupted by the sight of what appears to be a large crystal. Data checks the schematics and manifests and can find nothing like it whatsoever. As they change course, the structure changes course to match them. They extend the pod's arm and the structure explodes, destroying the arm and knocking the pod about wildly. They get back on course and encounter several more mines are quickly detected. A strange humming noise comes into range, they discover that they are caught in a tractor beam.

Back on board the USS Enterprise-D, Reginald Barclay brings some unusual sensor readings to Geordi La Forge's attention and speculates that it might be some sort of subspace communication carrier wave due to the fact that it's too unnatural and irregular. He has had no luck in decoding or translating it though. La Forge contacts Picard and informs him of the find. Picard, worried that they're in secure Federation territory and that they've found an unfamiliar encrypted signal, has Worf give them access to the Starfleet Intelligence encryption database.

Inside the archive, a second tractor beam locks onto Data and Riker's pod and begins dragging them in range of the two craft. They discover that all communication has been cut off inside the archive due to the nature of the tesseract. They quickly plan to use the damaged arm of the pod and direct power through it so that it will disrupt the tractor beam once they approach close enough. It works and they turn and begin to head back toward the entrance.

On the Enterprise, La Forge races onto the bridge and informs the captain that they've decrypted the signals and that "whoever they are, they're after Data." He continues on, noting that Barclay had managed to trace the transmissions to a spot in stationary orbit. "Romulans," is Picard's immediate response. He thinks for a minute and has Worf fire a volley of photon torpedoes near where the vessel should be. As they explode, a D'deridex-class warbird shimmers into view, its cloaking device disrupted.

Inside the archive, Riker and Data are now being fired upon by disruptors, obviously with the intent to stop the pod's progress rather than destroy it. They appear to have two choices, continue with their escape, or turn back and engage the enemy, neither of which are appealing. Data suggests hitting one of the craft into a data transmission beams with their own pod, and indicates that it might knock out the other craft's propulsion. Riker likes the idea, comparing it to bumper cars and proceeds to do just that, ramming one of the other craft, and its engines fail entirely. Data and Riker hurry to the gateway.

Riker report to Picard that security captured four Romulans inside the tesseract, and Picard lets him know that the warbird made a swift departure on its discovery. It appears that the Romulans were trying to make the station staff think that the archive had gained sentience in order to draw the Enterprise there. A transmission from the fleeing Romulan craft comes in, and it is Tomalak. Picard tells him that he thought Tomalak better than a mere kidnapper. Tomalak retorts that the Federation isn't above such tactics and mentions their acquisition of the Romulan cloaking device. He notes that it was a worthy effort and that Picard cannot begrudge them wanting such a wondrous gift as the android, one that the Federation is not taking full advantage of.

Later on, Riker and Data discuss their interrupted conversation inside the tesseract with Riker apologizing for his comments if he'd offended Data. Data responds that he knows that Riker would have acted in the most appropriate manner. 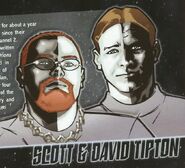 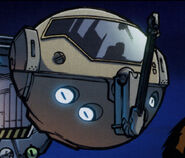