The Borg—half organic and half machine, they are the most feared race in the known galaxy. In their relentless quest for technological perfection, they have destroyed entire star systems, enslaved countless peoples, and, in a single brutal attack, decimated Starfleet's mightiest vessels. Only a final desperate gambit by Captain Picard and the USS Enterprise crew stopped the Borg from conquering the entire Federation. And now they have returned.

At Starfleet Academy, Cadet Jean-Luc Picard and his class (including rival Morgan Korsmo) attend a lecture on Starfleet history by Professor Talbot. A topic discussed is the doomsday machine encountered by the USS Constellation and USS Enterprise. Picard speculates that the planet killer could not have come from far outside the galaxy, because its low speed and requirement of planetary masses for fuel would make it incapable of traveling from another galaxy. Before and during the lecture, Picard repeatedly sees a mysterious woman, who disappears quickly and whom no other person is able to see. Later that night, Picard is alone in his quarters when he sees her again. She speaks to him, thanking him for his insight into the origins of the planet killer. She says that it was built to combat the soulless ones who destroyed her kind, and that she would stop them. Puzzled by her words, Picard tries to find out everything he can about the planet killer and its origins, but is unable to answer the questions the woman's appearance left with him.

On the planet Penzatti, the family of Dantar the 8th is engaged in a family ritual, when klaxons sound. A Borg ship is approaching. The planetary defense system, completely controlled by computers, analyzes the threat and recognizes the attackers as the Borg. Still, the Penzatti are not worried, because the defense system has always saved them, even from an attack by the Romulans twenty years earlier. However, the defense computers actually welcome the Borg, recognizing their way of life as superior, and the defense systems are deactivated. The Borg begin carving up large portions of the planet, transporting them to their ship with tractor beams. Meanwhile, the Penzatti try to defend themselves on the ground. Dantar the 8th is able to kill a Borg soldier with his energy weapon, but the others quickly adapt with force fields. Dantar is knocked unconscious, and a Borg drone enters Dantar's house. Trying to interact with a computer terminal, the Borg is attacked by Dantar's wife, who is able to stick a knife into the Borg's circuitry. The Borg defends itself, killing one of Dantar's daughters and his eldest son. The piece of Penzatti where Dantar's house stands is the last to be cut up by the Borg. While it is being dragged up, the house collapses, killing the whole family, with Dantar as the last witness. Meanwhile, another ship approaches the Borg cube in orbit and quickly begins an attack. Heavily damaged, the Borg stop transporting the last piece of the planet up, which begins to fall back to the surface. The Borg are able to send a warning to the Borg Collective before their ship is destroyed. The ship that destroyed them moves on.

2367
After the Borg are defeated at the Battle of Wolf 359, Starfleet begins rebuilding. The next Borg incursion is at Penzatti. 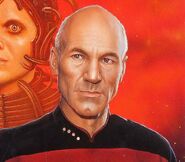 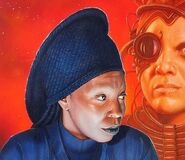 USS Enterprise-D.
Add a photo to this gallery

Retrieved from "https://memory-beta.fandom.com/wiki/Vendetta?oldid=608514"
Community content is available under CC-BY-SA unless otherwise noted.