unknown
"Vibrations in Time" was a 15-page Star Trek: The Original Series comic strip. It was the 24th weekly story arc in the UK comic strips series, published in five installments in TV21 Weekly in 1971. This was the last of six stories drawn by Vicente Alcázar and Carlos Pino. In this story, a temporal disruption sent the USS Enterprise into the past.

Teaser, September 11, 1971
The starship Enterprise passed through a strange time warp and found itself eight hundred years in the past, in orbit above the planet Zeltok. Knowing from historical records that the planet was shortly doomed to explode, Captain Kirk, Mr. Spock and two crewmen went down to see if Zelkot was inhabited…

During the night shift, the USS Enterprise travels through an astral storm that knocks out the crew and sends the starship a great distance through space. As the ship approaches a planet known to have self-destructed, they are stunned to discover that they have time traveled. The planet will be dead in two weeks, so Kirk takes a landing party with him aboard the Galileo to explore the world.

After narrowly avoiding gigantic ants and walking through an abandoned humanoid city, the crew spots a herd of gorillas that are beckoning them. Kirk lands the shuttlecraft near a fortress and meets Karn, the last surviving Zeltok humanoid. Armies of intelligent Zeltok ants had destroyed his people's civilization, but the sentient gorillas had protected him, and he intends to die in their company. Kirk tells him about the planet's impending destruction and offers to take him to safety. Karn prefers to stay with the gorillas. As the ants begin an assault on the fortress, missiles from the shuttle repel some of the ants, though the onslaught seems to be unstoppable. Karn steals a phaser and insists that the Galileo leave without him.

The shuttle returns to the Enterprise. As the starship leaves orbit, it is caught in another astral storm, which returns it to the 2260s. The transit erases the crew's memories of their travel into the past, leaving only a minor mystery: a missing phaser. 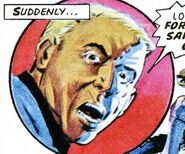 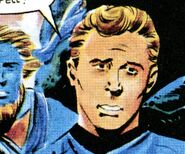 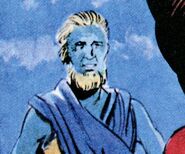 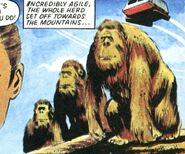 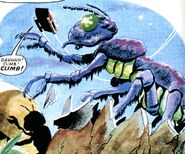 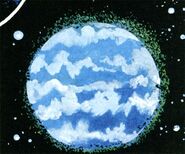 1465
The USS Enterprise arrived 800 years and two weeks into the past.
2265
After time travel, the Enterprise crew had no memory or evidence of their adventure, except that a phaser was missing.