A volcano is a geological formation on the surface of a planetary body. Molten rock is called magma within a volcano, and lava after it has been expelled.

Volcanoes form in tectonically active areas. Magma movement forces the crust to flex, sometimes producing tremors and earthquakes, and pressure forces magma up through the top of the volcano. Two eruption stages are called Vesuvian and sub-Plinean. A stratovolcano is one type of volcano. (TOS novel: Firestorm)

Lava from erupting volcanoes can form islands in oceans. Over a span of eons, the lava breaks down into highly nutrient soil. (TOS novel: Deep Domain)

Volcanoes can reach great heights in lower gravity environments. Mazama Mons on the moon Skaftar was 6,000 meters tall and 20 km across at the bottom. (TOS novel: Firestorm)

252 million BC, the Permian-Triassic Extinction Event on Earth occurred from prolonged eruptions by super-volcanoes that triggered planet-wide climate change. This sort of activity became a terraforming technique used by the SCE on lifeless worlds. (Star Trek Adventures RPG module: The Sciences Division)

10,000 years ago, Mount Seleya on Vulcan erupted, expelling with such strength that debris cratered nearby moons. (TOS novel: Firestorm)

1400 years ago, according to Klingon legend, Kahless the Unforgettable made the first bat'leth out of a lock of his own hair on the slopes of Kri'stak volcano on Qo'noS. (TNG episode: "Rightful Heir"; DS9 episode: "The Sword of Kahless"; TOS novel: Excelsior: Forged in Fire)

In 2259 in the Kelvin timeline, Spock planted a cold fusion device within an active volcano on Nibiru to save the lives of indigenous villagers. (TOS movie: Into Darkness)

In the mid 2260s, on Alpha 332, James T. Kirk and Spock warned two species warring on the side of a volcano that it would shortly erupt. The humanoid Parracas evacuated their nearby village, but the simian Turracas ignored them and were killed by exploding lava. (TOS comic: "The Gods Have Come!")

In 2266, Kirk commented that the scream made by Jobo, a Rykunian octopus, would freeze a volcano on the planet Mercury. (TOS comic: "Furlough to Fury")

In 2266, Spock had an atomic missile carrying certain chemicals launched through a volcanic crater and into the core of Metamorpha in order to stabilize the planet. (TOS comic: "The Peril of Planet Quick Change")

In 2267, a lava river from an erupting volcano dragged along the Galileo shuttlecraft. A Tactisian duplicate of the shuttle landed at the top of the volcano within its crater. (TOS comic: "The Mimicking Menace")

In 2267, volcanoes formed during an attempt to force the planet Rimillia to rotate, breaking the tidal-lock to its star. (TOS novel: Twilight's End)

In the 2260s, mining operations on Taragon threatened a gigantic native organism. It fought back by triggering mining disasters and an erupting volcano. (TOS comic: "What Is This Thing Called Spock?")

In 2269, during a Vedala mission to retrieve and return the "Soul of the Skorr" on an unidentified planet, Kirk and his expedition were threatened by an erupting volcano. They hastily repaired their Vedala cart to outrun the lava flow. (TAS episode: "The Jihad")

In 2274, the Totality tapped the geothermal energies of an active volcano on a planet near Zaran II. (TOS novel: Triangle)

In 2275 during a layover, Spock studied volcanoes for a day near Reykjavik, Iceland. (TOS novel: Spock's World)

In 2293, during his retirement, Kirk rafted on flows of lava from the Valtarik volcano. (TOS - Crucible novel: The Fire and the Rose)

In 2267, a non-humanoid Tactisian lifeform lived within an active volcano on the asteroid Tactis II. A video camera robot was sent to probe the dangerous interior. (TOS comic: "The Mimicking Menace")

In 2273, a colony of sentient crystalline lifeforms was discovered within Rakatan Mons on Skaftar. They were made of coagulated silicates and communicated by producing vibrations in magma. (TOS novel: Firestorm) 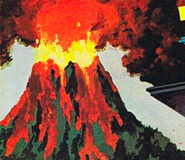 Moore's Fire Falls
Add a photo to this gallery

Retrieved from "https://memory-beta.fandom.com/wiki/Volcano?oldid=756393"
Community content is available under CC-BY-SA unless otherwise noted.