Voyage to Adventure was a TOS interactive young adult novel, the first of two published in the 1980s by Archway, an imprint of Pocket Books. The story was written by Michael J. Dodge, a.k.a. John M. Ford, with the reader making choices on each page that affected the outcome of the story.

Welcome to the starship Enterprise!

You're an ensign in the Starfleet and you've been assigned to the Enterprise! With Captain Kirk and Mr. Spock, you'll explore amazing new worlds. You might rescue an alien race from a deadly disease, or do battle with a Klingon spy, or time travel to another universe. If you make the right choices, you could be a hero and save the Enterprise. But be careful — or you, Captain Kirk and Mr. Spock could all be in terrible danger! Of course, if you don't like the way your story is going, you can always go back and start a new one!

Readers assumed the role of a Starfleet Academy graduate with the rank of ensign who was newly assigned to the USS Enterprise. The choice of working on the bridge with Kirk, in engineering with Montgomery Scott or in a science laboratory with Spock led to one of six unnamed adventures.

The Enterprise headed for a dilithium-rich planet within Federation space after the ensign deciphered a coded transmission from a Klingon battlecruiser stating their plan to plunder some unguarded dilithium mines. The reader chose whether to fire first or order the Klingons to surrender, leading to a variety of outcomes. In some cases, the battlecruiser was driven off, while in others the Enterprise incurred heavy damage and fled from the planet in defeat. One ending led to a field promotion for the ensign.

The Enterprise responded to a telepathic distress call from the Takoi homeworld. Kirk, McCoy and the ensign beamed into an underground refuge.

Going left led the trio to a small haven for plague survivors. A collar, if worn, would upload substantial historical and medical knowledge directly into the brain. Reader choices determined whether Leonard McCoy could cure the affliction.

Going right brought about a battle against illusory attacks as a group of Takoi attempted to seize telepathic control of the landing party. The struggle ended in either a peaceful rescue of the Takoi, the death of the ensign, or transporting back without the Takoi.

A Klingon disguised as one of the crew directed a small mouse robot to sabotage various engineering systems. As soon as enough functions were taken offline, he would use a small subspace radio to signal his nearby Klingon battlecruiser to attack. Although most choices exposed the spy or ended his threat, three choices led to the ensign's death.

The ensign discovered an unusual lifeform draining power inside a Jefferies tube. Several choices starved the creature of power or ejected it out an airlock, but two choices led to the ensign's death.

A food processor computer went haywire, becoming obsessed with oatmeal. It created a magnetic disruption inside a Jefferies tube as it tried to tap power from the warp engines. Most choices led to the device's deactivation, but two caused the ensign's death.

The Enterprise entered a region of space where time twisted into a mobius loop. Spock built some testing equipment, but a panel shattered and Spock was caught in temporal energy. Spock warned the ensign back, then disappeared.

Pulling a lever forward brought the ensign sideways through time to the ISS Enterprise in the Mirror Universe. He found Spock being taken to the ship's brig. Escape required signaling the prime reality Enterprise and making adjustments to the transporter. Half of the choices got them home, while others trapped the ensign in the Mirror Universe or in a never-ending time loop.

Pulling the lever backward took the ensign to the year 2230, where he and Spock encountered Captain Robert April and a much younger Mr. Spock. One choice led to the death of the older Spock, spurring the younger Spock to time travel and prevent it from happening. Other choices led to a safe return to 2270 or the ensign having to live out his life in the earlier generation. 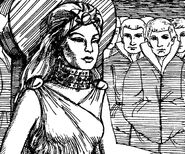 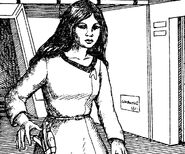 Reissue cover.
Add a photo to this gallery

Retrieved from "https://memory-beta.fandom.com/wiki/Voyage_to_Adventure?oldid=670752"
Community content is available under CC-BY-SA unless otherwise noted.