6133.4
Vulcan! is a TOS novel, the fifth of thirteen published in the 1970s by Bantam Books. The first of two novels written by Kathleen Sky, it was published in September 1978.

Spock: beamed down to a murderous planet in a dangerously shifting universe

A universe where a series of freak ion storms has changed the boundaries of space... where Arachne IV, inhabited by a strange race, may be lost forever to the Federation where Spock is sent on a death-defying assignment into a war of ant-types along with a brilliant, beautiful, bigoted scientist who hates Vulcans!

Captain Kirk, Mr. Spock and the crew of the starship Enterprise daringly journey on another thrilling mission toward the perils of unknown worlds.

Captain's log, stardate 6451.3.
Conditions in the Galactic magnetic field continue to deteriorate. Due to ion storms of unprecedented violence, the Neutral Zone separating the Federation from the Romulan Empire is shifting and will soon envelop the solar system containing the planet known as Arachnae, currently in Federation territory. Soon this system will be within Romulan space.

Our mission is to explore the system and search for intelligent life forms — and, if they exist, to aid them in avoiding Romulan domination. Starfleet has assigned Dr. Katalya Tremain to the Enterprise to assist with the search for intelligent life. Though Dr. Tremain is the Federation's foremost expert on the exobiology of this region, I cannot help but worry about her. Commodore Stone's description of the woman as "difficult to work with" is entirely too cryptic for my peace of mind...

Captain's log, stardate 6454.5.
I am logging an official protest on having to carry Commander Katalya Tremain aboard my ship. Her manner and attitude toward my First Officer is a disgrace to her uniform and to Starfleet. I will demand disciplinary action if there are any, repeat, any more scenes such as she enacted upon boarding the Enterprise. But what will happen when we get to Arachnae? Does she understand that she must work with Spock on the planet's surface? Why were we sent a woman guaranteed to be a problem, when we are in the middle of so delicate a situation?

Captain's Log, stardate 6459.2.
We are now in orbit around the planet Arachnae, and the situation aboard the Enterprise, while tense, is not nearly as difficult as I had assumed it would be. My only problem is making it quite clear to Dr. Tremain that she and Spock are co-leaders of the expedition to the planet's surface. According to Dr. McCoy, Tremain still insists that she could carry out the expedition on her own with a picked team of technicians, while Mr. Spock remains aboard ship to coordinate. This plan is totally unacceptable to both myself and Mr. Spock. It will become necessary for me to speak to Dr. Tremain before she and Mr. Spock leave for the planet's surface. I am not pleased that such a conversation is necessary.

Captain's Log. Stardate 6459.6.
An unexpected anomaly in the ion storms has caused further complications to our mission. By moving the border of the Neutral Zone faster than anticipated, the planet Arachnae has entered the Zone earlier than our estimates had predicted. Along with the Neutral Zone came a Romulan cruiser. Technically, it has no right to be in the Neutral Zone — but neither do we. I have put up my shields in case the Romulans should attack — but that now makes it impossible for me to beam up the landing party.

Captain's Log, Stardate 6459.7.
I am in the middle of an extremely difficult situation. My First Officer and Dr. Katalya Tremain are stranded on the surface of Arachnae by the presence of a Romulan warship. I have contacted Starfleet and I am awaiting further instructions. My previous orders were that I was not, under any circumstances, to fire on a Romulan vessel, which ties my hands considerably. But Starfleet is hours away by subspace communicators, and I know only that I must remain in the area until the Neutral Zone completely passes by the planet and Arachnae is in Romulan space.

The Romulan Commander worries me. He is very obviously a seasoned warrior, and I fear that I may have been sent an adversary whose abilities in battle may exceed my own. 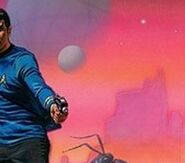 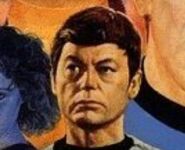 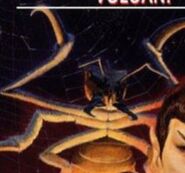 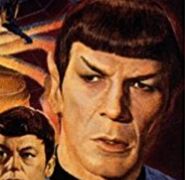 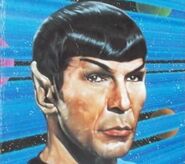