2329, 2344
Vulcan's Heart is a Star Trek novel by Josepha Sherman and Susan Shwartz published by Pocket Books in July 1999 as a hardcover book. A paperback edition followed in May 2000. Following the previous Vulcan's Forge in their series of books set after the TOS era, this novel is part of the interim period of The Lost Era series, but was not branded as a TLE book as it was published prior to that series being conceived.

Vulcan's Forge by Josepha Sherman and Susan Shwartz was widely praised as a groundbreaking Star Trek adventure that provided captivating new insights into both Spock and his native Vulcan. Now those same authors return with an engrossing new novel that bridges two generations of Star Trek heroes—and reveals a crucial lost chapter in the history of Spock.

2329
Now a diplomat for the United Federation of Planets, Spock agrees to a bonding with Commander Saavik. More than a betrothal, less than a wedding, the sacred Vulcan rite is attended by both Spock's father, Sarek, and a nervous young Starfleet lieutenant named Jean-Luc Picard.

2344
Ambassador Spock receives a top-secret communication from the heart of the Romulan Star Empire. Decades before, Spock had met and betrayed an honorable Romulan commander during the so-called "Enterprise incident". Now she needs his help to prevent a catastrophe that could threaten the peace of the entire quadrant. Spock risks everything by traveling incognito to Romulus itself, but his covert mission becomes even more perilous when both Saavik and Picard cross the Neutral Zone in search of him.

Enmeshed in the treacherous political intrigues of the Romulan capital, undone by a fire that grows ever hotter within his blood, Spock must use all his logic and experience to survive a crisis that will ultimately determine the fate of empires.

Vulcan's Heart is a powerful tale that explores an untold turning point in the ongoing saga of Spock and the world of Vulcan.

Spock and Saavik are betrothed to each other in a ceremony on Vulcan, attended by Lieutenant Jean-Luc Picard, Admiral Leonard McCoy, and the crew of the USS Armstrong, where Saavik is assigned. The newly-betrothed couple does not remain in each other's company for long – as Spock leaves Vulcan on a diplomatic assignment and Saavik returns to her duties on the Armstrong.

Fifteen years later, Saavik remains assigned as first officer aboard the Armstrong and Spock is on assignment to the world Oriki. While on Oriki, Spock receives a coded transmission from within the Romulan Star Empire from an old acquaintance, Liviana Charvanek– the Romulan commander from whom he and James T. Kirk stole an experimental cloaking device in 2267 (TOS episode: "The Enterprise Incident"). The message from Charvanek warns Spock that something sinister is building within the Empire under the leadership of the dishonorable Praetor Dralath. In hopes of both investigating the rumors and furthering his theories of a Vulcan/Romulan sundering, Spock embarks for Romulus. Posing as the Academician Symakhos of Bardat, Spock arrives in Ki Baratan – the Romulan capital – and is chauffeured to Charvanek's estate. The old friends discuss the state of the Empire under Dralath – plagued by agricultural failures and domestic unrest over high tariffs and taxes. Charvanek fears that Dralath poses a threat to the Emperor and the two wonder if the praetor is channeling resources to a military build-up. As Charvanek and Spock plan to attend a session of the Romulan Senate, she proposes a replacement for the Praetor – her cousin Admiral Narviat.

Onboard the Armstrong, Saavik is contacted by Admiral Uhura, who explains that Spock has mysteriously left his assignment on Oriki and gives Saavik intelligence that directs her to Romulus. Saavik receives passage into the Empire on board a Barolian freighter, posing as a Vulcan healer who can treat T’Shevit’s Syndrome, from which the Praetor is suffering. Meanwhile, at the Senate, Spock and Charvanek watch as Dralath attempts to intimidate the senators into submission by accusing them of treason against the Empire and even killing one of them. As Dralath stirs the senators to support a potential war, Spock recognizes Ruanek, a Romulan he encountered years before on the world Obsidian, and manages to separate the young man from his patron. Ruanek assures Spock that he remains trustworthy and supports efforts to replace Dralath – as long as Spock assures him that no harm will come to the Emperor. After they return, the Emperor collapses and Dralath summons a medic – the disguised Saavik – to tend to him, giving Spock a chance to recognize his wife.

Later, after the "healer" gives a speech on the syndrome afflicting Dralath, Spock sneaks into the estate of the Praetor to spy on a private dinner between Dralath and Saavik – and comes to realize by his jealousy that both he and his wife are in the early stages of pon farr. By exploiting Dralath's attraction to her, Saavik gets him to share his plans: he intends to attack the Klingon civilian outpost Narendra III, before expanding his war toward the Federation colonies along the border. After Saavik uses a nerve pinch to incapacitate Dralath, Spock reveals himself. Spock and Saavik use a mind-meld to plant false memories in the Praetor's mind in order to conceal their escape. Saavik leaves to warn the Federation and Narendra III, while Spock remains behind to help Charvanek, Ruanek and the others.

On Romulus, Ruanek introduces Spock to the dissidents working with Charvanek and Narviat – while Charvanek takes her vessel, the IRW Honor Blade, to Narendra III to intercept the Romulan fleet. Meanwhile, Saavik’s shuttle is intercepted by the USS Enterprise, under the command of Captain Rachel Garrett, and Saavik urges Garrett to Narendra III to save the Klingon civilians. As events converge at Narendra, the Honor Blade and Enterprise attack the Romulan fleet led by Volskiar, but Volskiar's assault on the outpost continues. In the midst of the battle, a spatial anomaly opens and draws the Enterprise into itself, though the vessel returns quickly from within. But even its return is not enough to turn the tide and the crew of the Honor Blade is captured by the Romulan fleet and taken into custody.

When the dissidents are betrayed by one of their own, Narviat is arrested - but to avoid enraging the Admiral's supporters, Dralath hides his prisoner deep underground. After Spock and Ruanek rescue Admiral Narviat from his subterranean prison cell, they place him in the protection of the dissidents to deliver him to Ki Baratan. In their rescue of Charvanek, the two join forces with her former first officer, Tal, and free her from a motorcade transporting her. Once the three reach the Romulan capital, Narviat hacks into a transmission by Dralath and presents the Romulan people with evidence of Dralath and Volskiar's dishonorable attack on the civilians of Narendra III. As riots erupt over the Praetor's deception, Spock and the dissidents sneak into the palace, and manage to disarm Dralath. After Narviat speaks before the Romulan people - accepting their request that he replace Dralath as Praetor - Ruanek stops Narviat from killing Dralath, only to watch as the fallen praetor is transported away.

With the situation on Romulus settled, and Spock collapsing from the pon farr, Ruanek decides to deliver his ailing comrade to Vulcan (thereby denying himself the right to ever return to Romulus). When their dilapidated shuttle attracts the predatory attention of a warbird commandeered by Dralath, the USS Stargazer under Captain Jean-Luc Picard must intervene to save the two. After destroying Dralath's vessel, the Stargazer delivers the two to Vulcan. Sarek thanks Ruanek for saving his son's life by offering to educate the Romulan during his self-exile. As Narviat proposes to Charvanek on the cusp of a new era for Romulus, Spock and Saavik are wed formally on Vulcan in a ceremony presided over by T'Lar.

"I thought she died fifty years ago" -- McCoy at Spock & Saavik's betrothal, about T'Pau. This is a nod to T'Pau's apparent death in the TOS novel: Spock's World.

"Still, I swear my manners went out the airlock somewhere. Beverly, permit me to present my dear, not-so-old friend, Jean-Luc Picard of the Stargazer. Jean-Luc, this is Beverly Howard, who is in medical school on Earth." -- Walker Keel, stardate 21018.6 (2344). 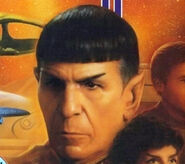 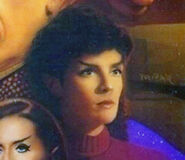 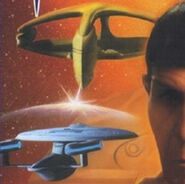 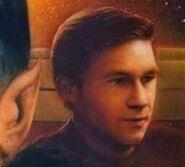