The Original Series No. 44

2253
Spock's first mission aboard the Enterprise!

From the book jacket
Here is a very special Star Trek novel—from the woman constantly voted by the fans as their favorite writer from the original Star Trek television series!

D.C. Fontana, writer of such classic Star Trek episodes as "Journey to Babel" and "This Side of Paradise", here brings us the never-before-told story of a very young Mr. Spock, on his first mission aboard the USS Enterprise. You'll also meet Captain Christopher Pike and his enigmatic first officer "Number One" (previously seen only in the original Star Trek pilot, "The Cage"), as well as the ship's brand new engineering officer, Montgomery Scott.

Vulcan's Glory is the tale of Spock's struggle to reconcile his many obligations - those forced on him by his Vulcan heritage, and those chosen by him upon his enlistment in Starfleet - to balance the wishes of others against the desires of his own heart.

At Ka'a Beach on Kauai, Hawaii, Lieutenant Spock walks barefoot and reminisces about the events surrounding his kahs-wan ritual. He has recently been promoted and assigned to the USS Enterprise, but has received two weeks' leave prior to his new assignment, during which he has been ordered to relax by his previous commanding officer, Captain Daniels of the USS Artemis. Spock receives a message from his father, Sarek, ordering him to return to Vulcan.

On Vulcan, Sarek refuses to see his son but communicates through Amanda his disappointment with Spock's management of family properties and of his delayed marriage to his betrothed T'Pring. After coming to an agreement with his father, Spock goes to visit T'Pring, where she expresses her own dissatisfaction with their arrangement. Only after Spock agrees to make a formal announcement of their marriage and pay a bride price to her family for the duration of their "engagement" is T'Pring satisfied (along with her secret lover, Stonn).

Meanwhile, the USS Enterprise prepares to resume its mission after a shore leave over Earth, while Captain Christopher Pike and his first officer Number One discuss their new second officer – Spock. Shortly after his transfer is complete, the Enterprise is ordered to the planet, Areta, to follow up on a previous mission during which Pike masqueraded as an Aretian to promote trading among three isolated populations on the planet, still recovering from a deadly nuclear holocaust. However, soon after launch, the Enterprise is redirected to investigate a new lead in the historical mystery of Vulcan's Glory, a priceless historical emerald that disappeared from Vulcan centuries ago.

When new research determines the course of the Vulcan ship He-shii carrying the Glory, the Enterprise follows it to an uncatalogued world. Pike allows a team of Vulcans to investigate the world where the He-shii might have crashed out of cultural sensitivity regarding the Glory. On the team, Spock and a junior scientist, T'Pris discover the remains of the Vulcan ship, missing an escape pod. Eventually, it is determined that the likely destination of the escape pod was Areta itself and the Enterprise resumes its original mission.

Meanwhile, the newly-transferred junior engineer Montgomery Scott and his roommate Bob Brien, engage in an age-old tradition of brewing engine room "hooch," or moonshine, during the downtime of the graveyard shift. Spock finds himself gradually drawn to T'Pris, in part for her difference from T'Pring and the two grow close as their mission advances. When the Enterprise arrives at Areta, the site of the escape pod's landing is discovered and the Vulcan away team transports down -- and soon discovers the Glory cradled in the arms of a dead Vulcan.

While Pike resumes his mission of promoting trade among the three populations of Aretians, a pair of star-crossed Aretian lovers (from opposing factions) are abducted by the third population (the mutant survivors of the nuclear war). On the Enterprise the ship's geologist, Meadows, seeks authorization to study the Glory, despite Pike's orders to keep it in a security vault. Even as Spock and T'Pris develop a romantic relationship, Meadows forges the captain's signature to obtain the Glory from the vault and takes it to study. Soonafter, Spock is called away from T'Pris to learn that Meadows has been murdered and the Glory stolen.

When Spock points out that the method of Meadows' murder could only have been performed by a Vulcan, the few Vulcan crew members are put under investigation, including himself and T'Pris.

On Areta, Pike encounters a familiar tribe of nomads and learns about the abduction of the lovers -- the son of a nomad leader and daughter of a city-dweller leader -- and becomes involved in the search for the two youths. Eventually, it is discovered that the youths were taken by mutants and the fathers become convinced their children are dead. But Pike insists on continuing the search and requests an away team assist him.

On the Enterprise, Number One puts T'Pris in charge of the investigation, which leads the Vulcan woman to search personnel histories for a clue into the possible non-Vulcan suspects. However, before long, T'Pris becomes a victim of the murderer herself and her research is erased.

Spock, Pike, and the other officers discover the location of the mutant settlement and stage a rescue attempt of the lovers, only to discover that they intend to stay with the surprisingly-civilized and docile mutants. However, the mutant leader soon explains his purpose for abducting them: to serve as ambassadors between the mutants and two other populations. When Pike returns with the lovers, they serve to establish trade between the three populations and he realizes his mission is complete. Upon returning to Enterprise, Spock learns his own lover is dead and requests to conduct the investigation himself.

In the end, Spock realizes that the murderer is a human-Vulcan hybrid like himself but one with more human genes than Vulcan, and therefore able to masquerade as a human. The officer is eventually taken into custody, explaining his intentions to avenge his banished Vulcan great-grandmother for injustices received by Vulcan.

1443 (Vulcan year)
The Glory is taken from the house of Kawarda by the clan Archenida at the battle of Deen T'zal.
796 AD
Areta's nuclear holocaust.
2215
Orloff born.
2237
Spock reminisces of his kahs-wan
2253
Spock is transferred to the Enterprise, when that vessel recovers an ancient Vulcan starship and travels to Areta in search of the Glory stone. 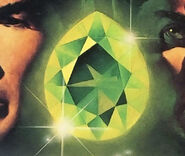