The Captain's Table No. 1

There's a bar called "The Captain's Table" where those who have commanded mighty vessels of every shape and era can meet, relax, and share a friendly drink or two with others of their calling. Sometimes a brawl may break out but it's all in the family, more or less. Just remember, the first round of drinks is always paid for with a story… even beyond the final frontier.

Captain James T. Kirk must join forces with Captain Hikaru Sulu, new commander of the USS Excelsior, to resolve a simmering political situation in a distant star system. For more than twenty years, the ancient enmity between Nykkus and Anjiri has resisted the best efforts of Federation diplomats. Now Kirk and Sulu have one last chance to end the bloodshed—before it erupts into a full-scale interstellar war!

Kirk takes Sulu to the Captain's Table, a bar for captains which they enter near Utopia Planitia. They each tell the story of an incident that occurred near the beginning of their respective tenures as captains. Shortly after Sulu was made bridge helmsman on the Enterprise following the death of Gary Mitchell, the ship came to the aid of a stricken craft and evacuated its crew, two related reptillian species called the Anjiri and the Nykkus, the former being the planners and the latter functioning as soldiers. They requested passage to an Orion outpost where they stole a yacht. The Enterprise followed them to their home in an asteroid field where Kirk and Uhura met the Anjiri matriarch, learning they scavenged ships in order to turn them into dwellings. The Anjiri promised to avoid Federation space in future.

Twenty years later, Sulu was taking command of the Excelsior at Deep Space 3 when it was attacked by Nykkus pirates attempting to steal stealth craft, FL-70 Falcons. They also took Chekov, Sulu's first officer, and other crewmembers hostage. Learning the Nykkus' main aim was to create an army of clones, Chekov offered to guide them to a Klingon research facility in return for the others being released, hoping the Klingons would destroy them. Instead, the Nykkus managed to set a trap, crippling the Excelsior and stealing the Falcons, as well as massacring the occupants of a Klingon colony ship.

The Enterprise arrived on the scene and set course for the Klingon research facility on Kreth while Sulu and Uhura headed for the Anjiri homeworld in a shuttle. En route, the Enterprise managed to retrieve Chekov, wracked with guilt after the incident brought to mind the disastrous end to his time as first officer of the Reliant. The Enterprise could do little to help the Klingons, but after an experimental weapon left all ships crippled, Kirk and Chekov managed to rescue a handful of survivors and help them defeat a Nykkus boarding party.

Sulu and Uhura learned that an accident in egg cultivation had produced intelligent male Nykkus, who had virtually wiped out the Anjiri trying to create more like them. The Federation and the Klingons agreed to return the Nykkus pirates to help repopulate their people, after the ringleaders were killed in combat with the females. Kirk returned Chekov to his old position on the Enterprise until he was ready to be first officer. Now he is and, after leaving the bar, Sulu meets with Chekov before they head back to the Excelsior together. 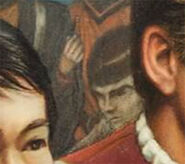 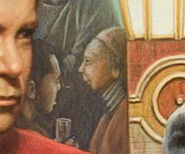 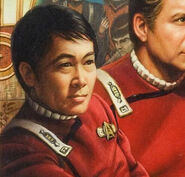 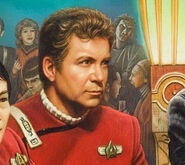