War in Space was a Star Trek: The Original Series coloring book, one of three 17" x 22" giant-sized books published in 1978. Although originally set in the 2260s, Wanderer Books updated the setting to the 2270s for its reprinting in 1980.

In this story, the USS Enterprise was threatened by what seemed to be a spacial anomaly.

While en route to a diplomatic mission on Omega IX, the Enterprise was drawn off course by a massive gravitational field, one so strong that Spock suspected it could be a black hole. Debris drawn in by gravity rocked the ship. As they drew closer, Spock picked up life readings. Becoming suspicious, Kirk contacted Starfleet Command, who informed them that Klingon activity was reportedly high in the region, but their intentions were unknown.

Suddenly the Enterprise was hailed by Klingon Commander Jadar, who was proud to have ensnared the famous Captain James T. Kirk with the latest Klingon weapon, one which he claimed utilized similar principles to a black hole. The Enterprise would be crushed in less than four hours. After the crew researched options, Montgomery Scott climbed through a Jefferies tube and jettisoned some antimatter from the warp engines. The antimatter destroyed Jadar's gravitational field weapon, heavily damaging Jadar's ship but leaving the Enterprise with only moderate injuries and damage. Spock estimated that they could still reach Omega IX on time, and the ship resumed its course. 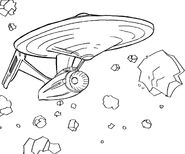 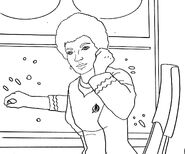 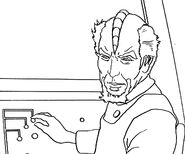 Commander Jadar at the controls.
Add a photo to this gallery 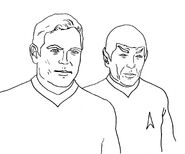 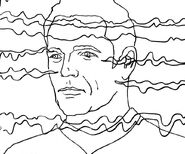 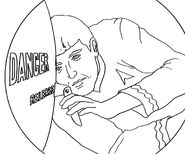 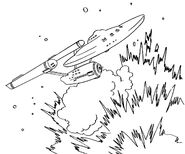 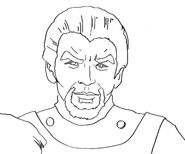 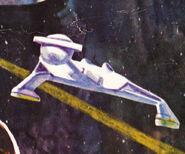 Jadar's battlecruiser.
Add a photo to this gallery

Retrieved from "https://memory-beta.fandom.com/wiki/War_in_Space?oldid=652165"
Community content is available under CC-BY-SA unless otherwise noted.