We Are Dying, Egypt, Dying!

We Are Dying, Egypt, Dying!

The Original Series (Marvel TOS) No. 14

8305.3
"We Are Dying, Egypt, Dying!" was the 14th issue of Marvel Comics' series of Star Trek: The Original Series comics. With this issue, the series cut back to a bi-monthly print schedule. It was the sixth of ten comics written by Martin Pasko. It was the second of three pencilled by Luke McDonnell and also the second of three inked by Gene Day.

Reprint teaser
On a world that's like a super-technological Ancient Egypt, Bones and Sulu are at the mercy of ... Pharaoh Kirk!

Captain's log – stardate 8305.3: With our first glimpse of the surface of Zeta Reticuli II, we have made a surprising discovery...

Pyramids on the surface of the planet suggest the existence of a civilization parallel to Ancient Egypt. Kirk and Spock convene a landing party in the briefing room of the Enterprise. The planet will be hit by a meteoroid shower in two days, making it necessary to warn any primitive people who may inhabit the planet. McCoy compares the pyramid complex to Giza around 2000 BC. The landing party will beam down with a security detail.

Captain's log – supplemental: As we explore the planet's surface, Spock will remain aboard the Enterprise, monitoring the advance of the meteoroid shower...

The landing party discovers what appears to be a temple or a tomb, but Kirk's tricorder detects high energy readings inside. Kirk and McCoy enter the building and discover a statue of Khnum, the Egyptian god of creation, and hundreds of mummies in a room enveloped in a powerfield. McCoy alerts Kirk to the fact that a sphinx outside the temple is beginning to move and attacking the rest of the landing party. As Kirk and McCoy run toward the door, Kirk stumbles and grabs onto the scepter of the Khnum statue, causing him to be enveloped by a pink ray. Chekov orders the security detail to scatter from the approaching sphinx, but Lieutenant Ralston tells Chekov he can handle the creature and is immediately killed by beams of phased light from its eyes. Sulu and Uhura take shelter behind a date-palm, which the sphinx knocks over, injuring Sulu's leg. Phasers have no effect on the sphinx, but Uhura realizes it should be vulnerable at the joints. Just as the creature is about to kill McCoy, Chekov, Uhura and DiFalco fire their phasers at its neck, decapitating it. Kirk emerges from the temple and stuns the others with his phaser.

Ship's log – stardate 8305.5 – Commander Spock recording. It has been two hours since the Enterprise has received any communication from the planet's surface.

The swarm of siderites will arrive at the planet's exosphere in 42 hours. Lieutenant Fletcher contacts Kirk, who is now wearing an Egyptian Pharaoh's headdress and orders her to stay off the frequency until he is ready to report to Spock. Both Spock and Scotty are nonplussed by Kirk's abruptness. McCoy is treating Sulu's fractured tibia, observed by Kirk, who is now in full Egyptian regalia. He violently objects to McCoy calling him "Jim", saying he is Menteptah II, a pharaoh's descendant who has returned to save his people "from the death that comes from the sky!" He orders McCoy to give him his and Sulu's communicator bracelets, and blasts McCoy with energy from his scepter when he refuses. When Kirk leaves with the communicators, McCoy shows Sulu that he still has Ralston's communicator, it being standard procedure to retrieve equipment from Starfleet casualties. Fletcher has been unable to contact any senior officer on the planet, so Spock orders her to hail every member of the landing party. Kirk has gathered all the communicators but Ralston's, and destroys them with a blast from his scepter. He bows before the Khnum statue, which speaks, telling him how Menteptah's son left the planet 10,000 years earlier with many of his people, who climbed a pyramid to board a giant spaceship and find females with whom to mate on other worlds. The statue claims that Kirk is Menteptah's descendant, whose racial memory was stirred by touching the statue's scepter. Kirk will awaken the planet's people and lead them to the new home he has found for them: Earth.

As McCoy sets Sulu's broken leg, Ralston's communicator beeps. McCoy briefly tells Spock they need help, but Kirk enters and knocks McCoy unconscious with another blast from his scepter. With communications cut off, Spock decides to beam down. Kirk and Uhura, now dressed as his queen, awaken McCoy and bring him to the other members of the landing party, who are lying on slabs and being administered an "elixir of obedience" through IV units. Two empty slabs remain for McCoy and Sulu.

As Spock heads for the temple, Kirk asks the Khnum statue to help him defeat their enemies "in the vessel above". Beams of energy shoot out of the statue's eyes and strike a nearby pyramid, the metallic top section of which emits a ray that hits the Enterprise in space. Uhura hooks up McCoy and Sulu to the IVs, explaining that she rejected the honor of being queen until "Menteptah" gave her the elixir. Without her noticing, McCoy rips the IV from his arm. Scotty reports to Spock that the unknown energy beam from the surface is causing the Enterprise to shrink, but not shrinking the crew with it. Entering the temple, Spock orders Scotty to move the crew to the Rec Deck, the largest room on the ship. Kirk confronts Spock and fights him, knocking his phaser away, and the Khnum statue fires at Spock. McCoy struggles with Uhura and injects her with cordazine, counteracting the drug she received and restoring her to normal. Kirk and Spock fight near the edge of the hole the statue blasted in the floor. When Kirk refers to the statue as "Khnum", Spock destroys it with his phaser, and Kirk's mind returns to normal. The Enterprise is still shrinking, making the transporters too small to use. The crew on the Rec Deck will be crushed to death in 15 minutes, the bridge crew even sooner. McCoy restores the rest of the landing party with injections. Entering the room with the mummies, he finds that the powerfield is gone, but he now detects lifeform readings. The mummies, kept in suspended animation by the powerfield, awaken and attack the landing party.

Kirk and Spock find another computer in an underground chamber. This computer and "Khnum", as well as the defense systems, were gifts from an alien race. Because the atmosphere was thinning, exposing the planet's inhabitants to radiation, and because the computer predicted the meteoroid shower, it placed most of the population in suspended animation while a representative searched the galaxy for another habitable planet. Kirk grabbing the scepter "gave the computer a prearranged signal", causing it to mistake Kirk for Menteptah's descendant. The Enterprise is now so dense that its orbit is decaying. As Spock attempts to use the computer to create a beam that will restore the ship to normal, Kirk realizes that Khnum's destruction will have awakened the natives in the sleep-chamber.

As the natives are about to overcome the landing party, Kirk enters and, in the guise of Menteptah's descendant, orders them to stop. The Enterprise begins to enlarge again. The landing party beams up, Scotty warning them to crouch low because the ship is not yet normal size.

Captain's log – stardate 8306.7: The Enterprise has regained normal dimensions and the landing-party has returned to its regular duties. We are intercepting the meteoroid shower and destroying it with photon torpedoes...

The Enterprise is returning to Zeta Reticuli II "to transport the natives to a radiation-free environment and instruct them in self-government!" Spock cannot comprehend a technology that could condense mass. Since Spock was able to use one of the planet's computers, McCoy wonders if he is related to the half-jackal god Anubis, whose pointed ears remind him of Spock's.

Stardate 8305.5, Doctor McCoy reporting. Having landed on the surface of Zeta Reticuli II to warn any inhabitants of an imminent meteor shower we have encountered an alarming situation... The planet is like a technological recreation of ancient Egypt. Already we've been attacked by a giant Sphinx! And now Captain Kirk somehow imagines himself to be the reincarnation of Mentaptah II. He is keeping us prisoner while he talks to a statue... of the ancient god, Khnum! (Serialized reprint) 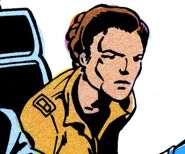 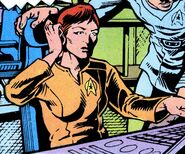 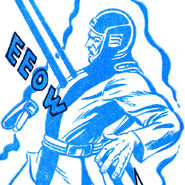 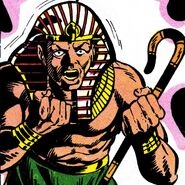 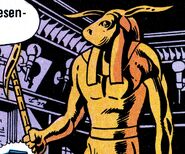 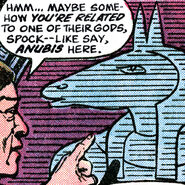 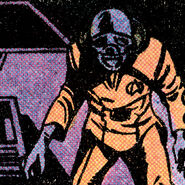 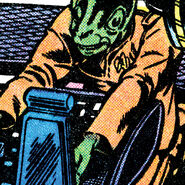