The Wells uniform[1] was a type of clothing, a 28th century[2] Federation uniform color-coded by department worn by personnel of Starfleet by the 2760s decade. The overall design was reminiscent of 24th century uniforms were the division color was displayed on the shoulders, and the fabric from the yoke down was black. (VOY episode: "Relativity", STO - Future Proof mission: "Time and Tide", STO website: The Temporal Lock Box)

The Wells uniform was named after the Wells-class temporal science vessel, like its Klingon Defense Force counterpart, the Korath uniform, referenced the Korath-class timeship. (STO website: The Temporal Lock Box)

Starfleet had adopted this uniform by the 2650s decade, in the 27th century. Commanding officer Voula was a Starfleet officer who traveled from that era aboard the timeship shuttle USS Wells. (ST performance: Star Trek Live)

Starfleet personnel aboard the Temporal Fleet Station at New Khitomer were clad in this outfit in the 2760s decade, in the 28th century. In the year 2769, New Khitomer Station received uptime and downtime visitors during the signing ceremony of the Temporal Accords. (STO - Future Proof mission: "Time and Tide")

In the 29th century, the Temporal Integrity Commission was the branch of Starfleet guarding the integrity of the primary universe timeline. Officers of its Timefleet wore the Wells uniform, including those on Wells-class timeships like the USS Relativity. (VOY episode: "Relativity")

Due to temporal incursions by the Tholian Assembly in the Azure Nebula, the 25th century Khitomer Alliance acquired timeships, technology and uniforms from the 29th century. The Ferengi-operated Lobi Crystal Consortium began selling the Wells uniform to Starfleet and Starfleet-aligned officers in 2409. (STO website: The Temporal Lock Box)

The personnel of the 31st century Ouroboros-class temporal raiders participating in the Battle of Procyon V on behalf of the Temporal Accordists donned this uniform. (STO - Future Proof mission: "Battle of Procyon V")

By the time the Kelpien and Ba'ul Alliance of Kaminar were inducted into the Federation[3], and the the Burn cataclysm wrecked the galaxy circa 3069[4], Starfleet had switched to an unrelated uniform style, with a gray base color and a different cut that abandoned the yoke-division. One of the first four Trill hosts of the Tal symbiont wore this outfit. (DSC episodes: "Forget Me Not", "Su'Kal")

In an alternate timeline resulting from a paradox where the 20th century industrialist Henry Starling caused an explosion in the Sol star system in the 29th century, Captain Braxton travelled aboard the USS Aeon to 2373 to confront USS Voyager. His uniform lacked the quilting on the division-part above the yoke, and he wore a blue-and-black rather than purple-and-black uniform. (VOY episode: "Future's End")

In a timeline thrown into chaos by the temporal anomaly crisis in the early 2380s, duplicates of primary universe officers emerged and joined Starfleet's and Q's efforts to resolve the crisis. These included Captain Braxton of the USS Relativity, in his purple command division outfit. (ST video game: Timelines)

The Starfleet Wells uniform was a two-piece attire, rather than a jumpsuit. The long-sleeved top, trousers and boots were a matching black. A yoke separated the shoulder part from the torso. Unlike similar styles of the 24th century, the uniform incorporated an angled collar with white trim, and a diagonal line across the shoulder. As a result, only the right shoulder featured quilted material and the department color. (VOY episode: "Relativity")

The color range varied. Aboard the timeship USS Pastak, Captain Benjamin Walker wore a blue-on-blue captain's variant. His first officer, Commander Nerada, was clad in the black version of the uniform, with red department color. Rank insignia across the crew were silver. (STO - Agents of Yesterday short story:|My Own Worst Enemy}})

Aboard the USS Relativity, the base of the uniform was black. Department colors were divided into command division purple, science division gray and operations division burgundy. The rank chevrons were gold. (VOY episode: "Relativity")

In one version of events, Captain Braxton of the USS Aeon wore a black uniform with blue department color. (VOY episode: "Future's End")

The rank delineation followed the system used in the latter half of the 24th century, and by default consisted of golden and "hollow" - gold-framed black - pins. Unlike the round pips of the 24th century, the Wells pins were chevrons pointing away from the shoulder. The pins were worn on the collar's right. These rank insignia included chief, ensign, lieutenant junior grade, lieutenant, lieutenant commander, commander and captain. On flag officers, the chevrons were enclosed in a gold-trimmed bar. Unlike previous and uptime styles, only one bar was attached to the collar's right, rather than one on either side. The flag ranks included rear admiral, lower half, rear admiral, upper half, vice admiral and fleet admiral. (STO - New Romulus mission: "Welcome to Earth Spacedock", tailor menu)

A black-and-gold combadge was worn on the left breast. It included the traditional Starfleet arrowhead, turned 90 degrees clockwise, and complemented by a silver cone that rounded the left side of the badge. The shape matched the blue-and-silver logo of Starfleet's Temporal Integrity Commission and Timefleet. (VOY episode: "Relativity") 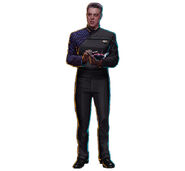 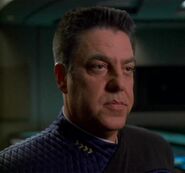 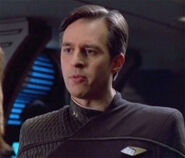 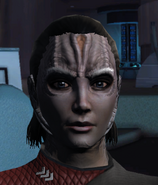 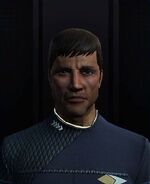 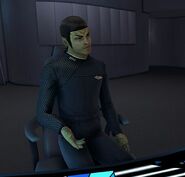