What Fools These Mortals Be..

What Fools These Mortals Be..

29:01.1
Ancient Greek deities force Kirk and Spock on an odyssey of peril! — "What Fools These Mortals Be.." was a Star Trek comic book story published by Gold Key Comics in 1978, the 53rd issue of their TOS series. It was the thirteenth comic drawn by Alden McWilliams and the fifth written by George Kashdan. In this story, the USS Enterprise encounters Zeus and other Greek gods from Mount Olympus.

Teaser page
Lured to a strange world by unknown forces, the Enterprise crew soon find themselves enslaved by an unseen, irresistible power! But only a trip through a gauntlet of terror will provide the final, shocking answer to the nature of their immortal captors!

Captain’s Log, star date 2901.1
We have diverted toward the border of the Perseus Arm, in response to an S.O.S. from the starship Pathfinder!

After saving the Pathfinder from three Klingon battlecruisers, James T. Kirk ordered the Enterprise back to its regular patrol sector. As they passed an unnamed planetoid, an unusual lethargy came over most of the crew. Kirk, Spock and Leonard McCoy beamed down to investigate, where they soon fought humanoid cannibals. When they were suddenly confronted by the mythological cyclops, Spock's suspicions were confirmed: they were reliving the adventures of Ulysses after the Trojan War on Earth from thousands of years ago, as written in Homer's Odyssey.

Captain's log, star date 2901.3
A fissure, similar to a dimensional warp, has occurred in the atmosphere, revealing a place that is quite familiar to anyone who has read the Greek mythologies of Planet Earth!

As Mount Olympus appeared through the clouds, the landing party was taunted by Zeus, Hermes, Pan and other mythical Greek gods, then struck by gale-force winds from Aeolus. After dispersing the wind with phasers set on wide field, they fled to a Homeric ship alongside a river, then encountered hypnotic Sirens and a whirlpool created by Scylla and Charybdis.

Eventually the wooden ship docked alongside an inhabited Greek-styled city. Zeus reappeared, bragging about his influence over the civilization. Kirk balked at what the gods were doing, as it violated the principle of the Prime Directive. Zeus shot lightning bolts at him, and Kirk retaliated by having the Enterprise fire the ship's phasers at Zeus' feet, which made the city's inhabitants laugh. Insulted, Zeus turned his back on them all, telling his fellow gods that they were leaving, never to return.

Identities of the Beings[] 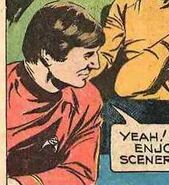 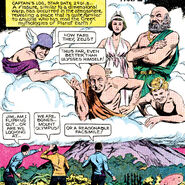 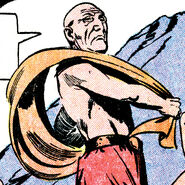 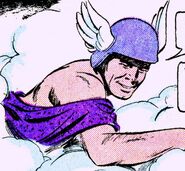 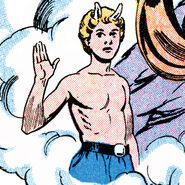 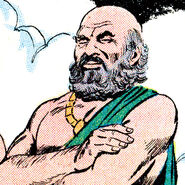 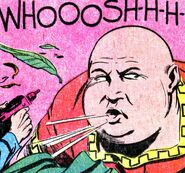 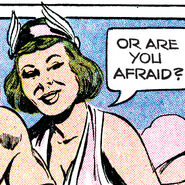 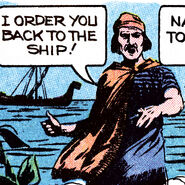 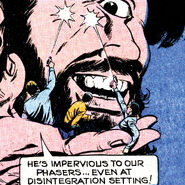 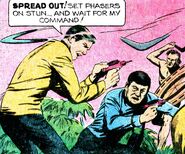