8950.1
"What Goes Around…" was the 41st issue of DC Comics's 1984 ongoing series of Star Trek comics, released in August 1987. The issue consists of a 21-page Star Trek: The Original Series story written by new series regular writer Michael Carlin. Pencil and ink art was by Tom Sutton and Ricardo Villagran, respectively, with colors by Michele Wolfman and lettering by Agustin Mas. This issue was edited by Robert Greenberger.

—Ace's losing scores of hard working employees to the ravages of space as a result!

—In the hopes that justice may be administered should the worst befall us all!

—We should've known a shipload of Andorian jewels would attract the wrong kind of attention!

Captain's log, stardate 89501.7
The Orion pirates have been incarcerated and the innocent merchant ship has been sent on its way…

… Only the Enterprise's troubles remain unsettled. 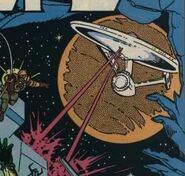 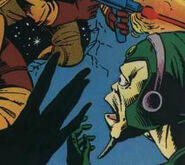 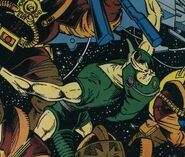