What Pain It Is to Drown

What Pain It Is to Drown

6502.4
"What Pain It Is to Drown" is the lead story in the eighteenth issue of John Byrne's New Visions comic series, published in October 2017.

Pulled down to a world made entirely of water, the Enterprise is in danger of literally flooding – while Spock and McCoy discover a sinister purpose behind this bizarre planet.

Captain's log, delayed entry.
More and more of my ship is filling with this alien liquid. Fifteen crew members are dead. How can I tell their loved ones that they drowned in deep space?

Captain's log, delayed entry.
Mister Scott's plan has worked, but not all decks were being drained evenly. To reach the bridge required a circuitous route... Even with that, there were times I found I could not avoid the still-flooded areas. As when I came to a turbo-lift whose doors would not open. Manual operation showed why. The shaft was flooded. The liquid rushed away quickly, dispersing a thin layer across the deck. But the car was stuck on a level below me. And the water in the shaft showed no indication of draining any further.

Which left me no choice: To go up, I must first go down. Reaching the top of the car, I entered through the access hatch... securing it behind me, so only the water in the car flooded out onto the deck. 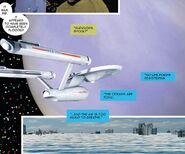 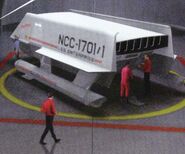 Da Vinci on the hangar deck.