unknown
"Where Giants Tread" was a Star Trek: The Original Series comic strip. It was the 18th story arc in the UK comic strips series, published in nine installments in TV21 Weekly in 1970 and 1971. In this story, unexpected gravity from a cloaked planet forces the USS Enterprise to land on its surface.

Omnibus teaser
When Kirk is badly injured, the insane Captain Eustace Hensham is placed in command of the Enterprise, and the crew becomes trapped on Carnak, a planet of xenophobic giants.

From out of nowhere, an undetected meteor shower pummels the hull of the Enterprise, leaving the ship immobilized while engineering teams conduct repairs. While outside in an EV suit, Kirk is accidentally struck by a large tool and severely wounded. Leonard McCoy sends him back to Earth to recuperate, and HQ assigns Captain Eustace Hensham to assume temporary command.

Hensham's arrogance rubs the crew the wrong way, but they nonetheless obey his orders. After Montgomery Scott determines that the meteors had been manually shot at them, Hensham orders the ship to track their source, which turns out to be a cloaked mass driver. It fires another round of rocks at them, which this time are deflected by the shields. Evasive maneuvers at full speed catch the ship within the gravity well of a cloaked planet. Hensham hesitates, then panics and orders the crew to abandon ship. Spock countermands him, ordering vertical thrusters to hold the ship level as it descends. The Enterprise safely touches down on the planet's surface, then tips awkwardly to starboard. Hensham is relieved of duty and taken to sickbay.

Outside, a trio of tanks approach. Spock leaps out of an airlock to meet them. When an officer steps out of the tank, he is revealed to be a giant, perhaps seventy feet tall. Using the universal translator, Spock explains that they have no hostile intent and are helpless. The relatively tiny Spock, Scott and Pavel Chekov meet with the planet's president, who is amenable and hospitable, but as his people are isolationist, he can't allow them to leave. He gives them a tour of the city and nearby spaceport, where they meet the president's son Mankar, who is sympathetic to their plight.

Meanwhile, Hensham escapes, sneaks out of the ship and bombs one of the Carnak tanks. Spock arrests Hensham and locks him up, but it is too late. Carnak reinforcements retaliate with bazooka bombardment. Spock fires starboard vertical thrusters to keep the primary hull off the ground so shields can defend it, but eventually they lose power and the ship tips again. Mankar heads through the battleground to help them, but is struck by weapons fire. Hikaru Sulu and Chekov accompany Spock outside to find Mankar barely alive. Spock brings the president and a doctor to the fallen Carnak. The doctor doesn't have medicine to help, but Leonard McCoy brings a full drug kit and together they stabilize him. The president apologizes for their misunderstanding and agrees to help them leave so long as they kept their location secret. Carrier rockets attached to the Enterprise are able to launch the starship back into space. 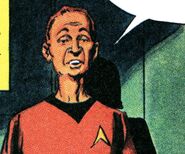 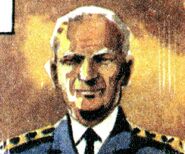 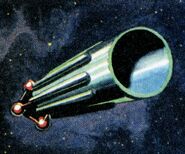