Where No Man Has Gone Before

Where No Man Has Gone Before

"Where No Man Has Gone Before" was the second pilot episode of Star Trek: The Original Series, the first episode produced in the show's first season, aired on 22 September 1966. The episode was written by Samuel A. Peeples, directed by James Goldstone and novelized in Star Trek 8 by James Blish. An additional adaptation was published, in the form of the second "Fotonovel" of the Star Trek series, using sequential stills from the episode with word balloons to re-tell the story.

Fotonovel introduction
For centuries, man has dreamt of possessing god-like qualities ... to be omniscient ... all wise ... to be able to create anything he wants.

But this dream has always remained locked in man's imagination — a fantasy.

Until suddenly, inexplicably, two members of Captain Kirk's crew are singled out and are mysteriously endowed with super-human powers... They are capable of doing anything they want. They can create and they can destroy.

And when this incredible power is directed against Captain Kirk, he is forced to enter a world... Where No Man Has Gone Before.

Captain's log, Stardate 1312.4
The impossible has happened. From directly ahead, we're picking up a recorded distress signal, the call letters of a vessel which has been missing for over two centuries. Did another Earth ship probe out of the galaxy as we intend to do? What happened to it out there? Is this some warning they've left behind?

In the USS Enterprise's briefing lounge, Captain James T. Kirk plays three-dimensional chess against his Vulcan science officer, Lieutenant Commander Spock. Kirk is preoccupied with the unexplained distress call, and hardly reacts when his opponent warns the captain of a checkmate against him on his next move. The captain notes that Spock played an "irritating" game, prompting Spock to respond with feigned confusion, noting that irritation was an Earth being's emotion. The captain responds by making a move that catches Spock unawares, avoiding the checkmate. Kirk asks if Spock is sure he does not a know what irritation is. Spock mentions that Kirk might be referencing his Vulcan ancestor who married a female of Human descent, but Kirk interrupts and jokes that it must be terrible to have "bad blood". The captain's anticipated bridge update regarding the Earth vessel signal origin comes over the intercom. Lieutenant Lee Kelso reports the source of the signal is now within tractor beam range, and that it is only about a meter across, too small to be a spacecraft. Kirk orders the bridge to lock on and leaves the lounge with Spock.

In the transporter room, Chief Engineer Montgomery Scott adjusts the transporter, preparing to beam the signal source into the ship. Kirk arrives, and Scotty energizes, rematerializing what is recognizably an older recorder-marker used in emergencies. Spock observes damage he believes sustained during the ship's destruction. Montgomery Scott loads computer tapes to interface, and the ship's library begins to receive computer transmissions from the recorder. Captain Kirk orders the crew go to red alert stations and analyze the data.

During the rush to stations, Kirk and Spock enter a turbolift, followed by Lieutenant Commander Gary Mitchell. A good friend of Kirk's, Mitchell jokes with his captain, wondering out loud about Kelso's excitability and Spock's chess skills.

Spock begins to analyze its memory banks. They indicate that the Valiant had encountered an unknown force in this region of space. Spock hears urgent requests for information regarding extrasensory perception (ESP), and then, shockingly, what appears to be the Valiant's captain giving the order to destroy his own ship.

Dehner concludes that Mitchell is mutating into a more advanced kind of human. But Hikaru Sulu cautions that at the rate at which Mitchell's powers are growing, he will not be human for much longer. Realising the threat that Mitchell might pose, Spock suggests marooning him on the planet Delta Vega and one other option, kill Mitchell while Kirk still has time—a coldly logical recommendation that Kirk is reluctant to accept until Mitchell murders Lieutenant Lee Kelso while escaping.

On the planet's surface, Kirk hunts down his friend and warns him that his absolute power will lead to absolute corruption. Mitchell's response is to attempt to kill Kirk. Dehner uses her own powers to stop him, but both she and Mitchell are killed in the resulting battle.

Kirk records that both gave their lives in the performance of their duties—a decision that meets with Spock's approval. Kirk asserts that there is hope for Spock after all.

Captain's log, stardate 1312.9.
Ship's condition, heading back on impulse power only. Main engines burned out. The ship's space warp ability gone. Earth bases which were only days away are now years in the distance. Our overriding question now is — what destroyed the Valiant? They lived through the barrier, just as we have… What happened to them after that?

[Captain's log], stardate 1313.1.
We're now approaching Delta Vega. Course set for a standard orbit. This planet, completely uninhabited, is slightly smaller than Earth. Desolate, but rich in crystal and minerals. Kelso's task: transport down with a repair party, try to regenerate the main engines, save the ship. Our task: transport down a man I've known for 15 years, and if we're successful, maroon him there.

Captain's log, stardate 1313.3.
Note: commendations on Lt. Kelso and the engineering staff. In orbit above us, the engines of the Enterprise are almost fully regenerated. Balance of the landing party is being transported back up. Mitchell — whatever he's become —keeps changing … growing stronger by the minute.

VHS release with "The Cage".

Overseas VHS release with "The Cage" and "The Corbomite Maneuver". 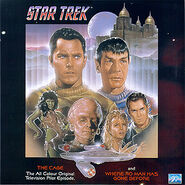 LaserDisc release with "The Cage".

Blu-ray release with "The Trouble with Tribbles", "Errand of Mercy", "Space Seed" and "The Cage".

Painted artwork was created to advertise this episode, notably in TV Guide. The combination of scenes was used as the cover art for at least three versions of the Star Trek 1 novelization by James Blish. The episode itself was not novelized in that volume, but instead was included in Star Trek 8. 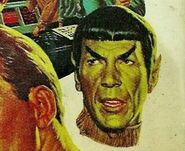 The Enterprise departs from the galactic barrier.

The surface of Delta Vega. 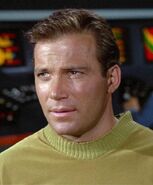 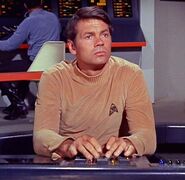 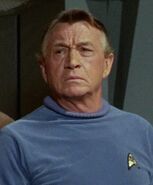 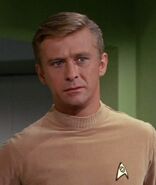 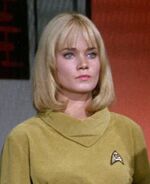 Mitchell and Dehner on Delta Vega.

The Enterprise departs from the galactic barrier. 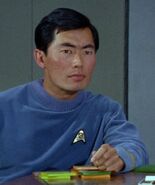 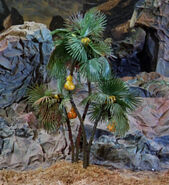 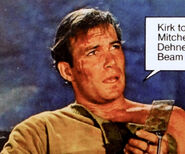 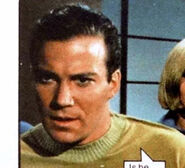 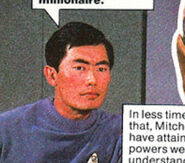