Where Silence Has Lease

Where Silence Has Lease

Apparently, the ALF's curiosity was so high that it was willing to kill, just to understand what death was. Which it did to the conn officer, Ensign Haskell -- who died horribly and painfully, shaking uncontrollably, then screaming and contorting his face, and very quickly collapsing on the floor of the bridge in a semi-fetal position with his hands clasped over his mouth and eyes wide open.

The experiment had begun.

The Enterprise is on a charting mission in the Morgana Quadrant. Commander Riker is taking part in one of Worf's calisthenic holodeck programs. They are attacked by vicious monsters and Riker is somewhat overwhelmed by the violence. When the program ends, Riker asks Worf if all his workout programs are like this. However, Worf admits that others are more intense, but "too personal" to share.

On the bridge, Wesley Crusher detects an unusual reading, an area of total blackness, seemingly devoid of space, matter and energy. It is like a "hole in space." Captain Picard orders a probe to be launched into it. However, as soon as it enters the void it disappears. This alarms Worf and he recommends raising shields, for the void reminds him of a Klingon legend about a space creature that devours "entire vessels". He soon realizes that he is being foolish, and Picard orders another probe to be launched. This second probe also vanishes.

Acting Ensign Crusher tells Picard that he can determine the boundaries of the anomaly, based on where the two probes disappear-and suggests that he can bring the ship closer. Picard agrees and orders Crusher to bring the ship in closer, using thrusters only. Suddenly, the blackness expands and envelopes the Enterprise. Data tries to scan the surrounding area, but there is absolutely nothing to see. Picard decides to proceed with the mission and orders Crusher to set a course out of the void. However, no matter how fast or how far they go, they cannot leave. They drop a beacon in order to help them get a fix on their position. They set off on a course away from the beacon, yet soon enough they are approaching it again. They are going in circles. Picard orders full stop.

Suddenly, they detect a Romulan Warbird approaching them. It fires on them. The Enterprise returns fire and destroys the ship with single torpedo. Picard thinks that the battle was too easy and Data detects no debris from the Romulan ship. Another ship appears on sensors. This time it is the USS Yamato, their sister ship. They hail the vessel but there is no response. Sensors detect no life signs. Riker recommends sending an away team over. Picard agrees and Riker and Worf beam over. On board, they find that the ship makes no structural sense. There are several bridges and when one walks through a door, they wind up not where they expected. This situation infuriates Worf and he begins to lose his temper. However, Riker calms him down.

Meanwhile, on the Enterprise, a void is detected, through which stars can be seen. It appears to be a way to escape, but Picard will not leave without the away team. The starfix disappears. Suddenly, the Yamato begins to vanish. Picard orders Miles O'Brien to beam the away team back immediately. O'Brien succeeds, in the nick of time. Riker comes to the bridge, very agitated. He has had enough and suggests that they, "Put all this technology to work, and get the hell out of here!" Another starfix soon appears. A pleased Picard orders the conn officer, Ensign Haskell, to set a course towards it, but as soon as this is done, it quickly closes. Another starfix appears, but once again vanishes when a course is set towards it. Yet another starfix appears, but Picard ignores it. Haskell observes that it seems closer than the others, yet Picard still holds position.

Dr. Pulaski thinks that the crew is being treated like "rats in a maze". Counselor Troi says that she can sense a vast intelligence at work. Picard has had enough of responding to stimuli and decides to do nothing from now on. Suddenly, a disjointed face appears on the screen. It introduces itself as Nagilum. It inquires about Pulaski's "construction" and how it differs from most of the other people on the bridge. Pulaski explains that she and Troi are female and that the others are male. Picard says that these differences are necessary for the propagation of the species. Nagilum asks for a demonstration of this but Pulaski refuses this request.

Nagilum then inquires about Humans' "limited existence", in which, "you exist, then you cease to exist. Your minds call it... death". Suddenly, Haskell begins to shake violently. He grabs his face in a vain effort to control himself, but falls from his station screaming. He collapses on the floor, in a fetal-position, with his hands clasped over his mouth and dies with his eyes still open. Pulaski rushes to help him, but there is nothing that can be done. Nagilum watches his victim die, fascinated. "How interesting" he mutters. Pulaski confirms that Haskell is dead, and an angry Picard declares, "We cannot allow you to do that! We will fight you!"

Nagilum replies that in order to completely understand death, he is going to have kill about a third or a half of the ship's crew. Picard calls a staff meeting and opts to initiate the ship's auto-destruct sequence rather than allow the entity to perform any more experiments on them. He and Riker set the sequence for twenty minutes. Picard, while preparing himself in his quarters for the destruction of the ship, is visited by Data and Troi to discuss death and the implications of death. After a short discussion, Picard realizes that both are merely Nagilum in disguise, and that they are trying to trick him into aborting the self-destruct. Picard verifies Data's location, which is on the bridge. "It's not going to work, Nagilum," he says. The two impostors vanish and suddenly the ship is back in normal space.

Picard goes to the bridge to make sure that they are free. With a few seconds left to spare, he orders the computer to stop the countdown. When asked if he concurs, Riker replies, "Yes! Absolutely! I do indeed concur! Wholeheartedly!" The sequence stops and Picard jokingly informs Riker that a simple "yes" would have sufficed.

Picard goes to his ready room and hopes that Nagilum got what he wanted. Suddenly, Nagilum appears on the desk screen, and informs Picard that he got much more than he needed. Nagilum reports his conclusions to Picard. He says that humans, "seem to find no tranquility in anything. You struggle against the inevitable. You thrive on conflict. You are rash, quick to judge, slow to change. It's amazing you've survived. As a species, we have no common ground. You are too aggressive. Too hostile. Too militant". Picard does not argue with him, but points out that they do have one trait in common, curiosity. Nagilum, with a Human-like chuckle, agrees. Picard also says that they may meet again, but that next time, it will be out among the stars. Nagilum fades off screen.

Picard then returns to the bridge, and orders Crusher to put them back on their original course. Riker tells him to steer clear of, "any holes". 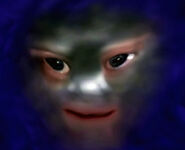