Who Mourns for Adonais?

Who Mourns for Adonais?

"Who Mourns for Adonais?" was the 33rd episode of Star Trek: The Original Series.

On stardate 3468.1, the starship USS Enterprise, under the command of Captain James T. Kirk, is nearing orbit of Pollux IV, a class M planet, for a survey. Suddenly, a huge energy field in the shape of a glowing green hand appears and grabs Enterprise; halting its movement. Kirk tries to wriggle the ship free of the hand by using the ship's impulse engines, but to no avail.

An apparition, wearing a golden laurel wreath on its head, appears on the bridge viewscreen and addresses the ship's crew as his "beloved children". The words of the figure boom with a godlike presence, and he seems impressed with the Human species for finally making their way into deep space. Kirk demands that the ship be set free, but the being responds by tightening the grip, threatening to crush the ship. Kirk backs off, and then the apparition invites them down to the planet, all except for Mister Spock, whose pointed ears remind him of Pan's annoying nature.

Kirk leads a landing party that also includes Doctor Leonard McCoy, Engineer Montgomery Scott, Ensign Pavel Chekov, and Lieutenant Carolyn Palamas (who specializes in archaeology and anthropology, and whom Mr. Scott shows growing affection toward). The team arrives in what appears to be an ancient garden from Mount Olympus, complete with marble columns and Greek statues. They soon encounter an attractive man being dressed in a short chiton. The humanoid Being identifies himself as the god Apollo. He informs the party that he will not allow them to leave, and renders the team's communicators and the transporter room functionless. He indicates that he wants the crew of Enterprise to settle in the Pollux system, to serve and worship him as their god, which Kirk instantly refuses ("If you wanna play god and call yourself Apollo, that's your business, but you're no god to us, mister.").

Annoyed, Apollo grows to a gigantic height as a show of his awesome power, but he quickly shifts his interests toward Lt. Palamas which angers Mr. Scott. Apollo admires her beauty, and Palamas seems flattered as he takes her hand. Scotty steps forward to defend her against Apollo's advances, but he finds his weapon destroyed. Apollo then magically transforms the Lieutenant's uniform into a revealing peplos and announces he will take her as his bride. Scotty protests again, but Apollo repels him with an electrical shock sending him to the ground.

After this display of his power, Apollo appears drained, retiring with Lt. Palamas to another area of the planet, which leads Kirk to the idea that he needs time to recuperate his energy. McCoy scans Apollo, discovering he has an extra organ in his chest, but the doctor isn't sure of its function. He guesses it may have something to do with the alien's powers. Kirk schemes a plan to deliberately anger Apollo to see how far his powers can go. Maybe if he is weakened enough he will lose his hold on Enterprise and the party can overpower him once and for all.

Meanwhile, Lt. Palamas, starry-eyed in love, learns all that she can from her divine sweetheart. Kirk and McCoy conclude that he is indeed the real Apollo, who was part of a group of powerful aliens that once visited Earth 50 centuries ago and established themselves as gods to the ancient Grecians. Eventually all but Apollo realized that humanity had outgrown them. They spread themselves "upon the wind" and faded away into nothing. He then mentions that he "knew [Carolyn] would come to the stars" and be forever by his side as his consort. Carolyn doesn't understand, but Apollo manages to seduce her by saying that fifty centuries ago, gods took mortals with them to love and care for, like how his parents fell in love. They then kiss.

After an attempt at provoking Apollo ("Mankind has no need for gods. We find The One quite adequate."), which Lt. Palamas stops by convincing the powerful being not to hurt her friends, Apollo then instructs Kirk to make arrangements for the people of the Enterprise to come down to the planet with supplies, food, and tools. Once that is done he will destroy the ship and begin a new society of humans to rule over. Kirk takes Carolyn aside and tells her to reject Apollo if he does not comply with Kirk's demands to leave, as she will condemn all of them—including Carolyn herself—to becoming slaves if she accepts him.

Meanwhile, in orbit around the planet, Mr. Spock manages to locate the power source for the force field holding Enterprise. When finally able to communicate with the landing party, he asks Kirk if there is a structure nearby. Kirk confirms the structure, but tells Spock to hold off firing at it as the landing party is not all together and they want to know where Apollo is when the building is attacked.

Reluctantly putting duty before her own heart, a love-sparked Carolyn lies through her teeth and tells Apollo she was only using him to get information, that she is not a "simple shepherdess that [Apollo] can awe" and could no more love him than she could love a new species of bacteria. Angered and hurt, a broken-hearted Apollo calls down thunder and lightning and prepares to punish the landing party (and Carolyn indirectly). Kirk orders Spock to lock phasers on the temple to draw Apollo back to it. Spock is able to punch through the force field with the ship's phasers and destroys the temple. Carolyn's face becomes bruised and her hair becomes disheveled as this is going on.

Apollo is stunned when his powers are nullified. Weakened, he turns to the sky, growing gigantic again, and pronouncing sadly that there is no room left in the universe for gods. Before he says this, he tells the Enterprise crew that he would have taken care of them and would have loved them as a father loves his children, and that he legitimately loved Carolyn with all his heart. He then pleads with his fellow deities to take him away. Rejected by a mortal woman, and bereft of his powers, Apollo fades away.

Kirk remarks with some regret that Apollo and his fellow gods had once been a major inspiration for mankind, driving civilization to new heights in art and philosophy. With that in mind, he says: "Would it have hurt us, I wonder, just to have gathered a few laurel leaves?" 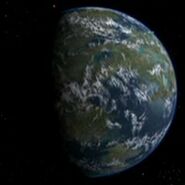