August 1995
The Worf Special was an issue of Malibu Comics' Star Trek: Deep Space Nine comic series, released in 1995 as a one-shot special issue release. To date it is the only Star Trek work to be produced with the character of Worf being the focus of the subtitle.

From solicitations: With tension building between the Federation and the Klingon Empire, DS9's newest crew member faces a test of his honor and loyalty. An intrigue de­signed to further sabotage relations between the two powers is being played out, and Worf must find the truth before the damage done becomes irreparable. 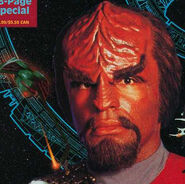