19:29:06
"World Against Time" was a comic book story published by Gold Key Comics in January 1977, the 42nd issue of their TOS series. It was the 14th comic written by Arnold Drake and the fourth illustrated by Alden McWilliams. In this story, a landing party from the USS Enterprise discovered giant-sized humanoid children living in an abandoned city.

Table of Contents, Key Collection, Volume 5
This edition features… "World Against Time" where the ravages of time and aging work in reverse and its inhabitants get ever younger. So tantalizing a concept that everyone can envision, if only for their own lives, to go backward and be young again. A constant theme within prose since Ponce De Leone discovered the fountain of youth and Ron Howard directed Cocoon. If only the notion had been visited on us all.

A landing party of Kirk, Spock, McCoy and Scotty explored a city on the surface of newly discovered planet 137, one which was built for 12-foot-tall humanoid inhabitants. They found large letter blocks and a doll, then met a six-foot-tall baby named Baboo, who took them to a nursery where at least ten other children were playing with toys. He said Elya provided for them and would be back soon, so the landing party waited. McCoy was clocked on the head when Niki hit him with a rattle. Scott put Niki on his lap and told him a futuristic version of the Goldilocks fairy tale. However, Scott got annoyed when the baby soiled its diaper.

Two young children arrived, Emperor Wenomi and Captain Bedo, one armed with a sword and the other a crossbow, and ordered the landing party to get away from the children. The captain was nervous and threatening, which was too much for Scotty, who pushed aside Bedo, and prepared to spank Wenomi. Then nine-foot tall teenager General Macador appeared and warned them away. McCoy asked them where their parents were. Lady Elya said they were their parents. They were de-aging and would be reduced to infancy and vanish in a few days, a time they called V-Day. They said they were middle-aged 40 days ago. Their oldest survivor, Emperor Wenomi, was 152 years old but appeared like a ten year old.

Captain's log, stardate 1929.06, continued.
On that strange planet populated only by children who play at war and power, we suddenly find ourselves facing a very real firing squad!

Macador's firing squad was stopped by Elya and Kirk. They explained that 193 days earlier, an earthquake exposed a vein of radioactive material within the society’s holy cave of Nooaja. Exposure de-aged animal life about one year per day, although it varied with distance from the cave. Wenomi said all their surviving people were in the city. They showed the landing party their holy Book of Nooaja, which depicted Nooaja, a large, glowing energy within a cavern, and their high priest Sharaba, who first discovered the de-aging effect.

McCoy headed back to the ship to make an antidote to the radiation poisoning. Kirk and Spock thought it best to rebury the Nooaja radiation. But Macador interpreted the decision as heretical, so he knocked out Wenomi and ran for the cave. By the time Spock and Scott arrived with a canister of explosives, Macador was half his previous size and falling out of his clothes. As he ran scared into the cave to protect it, he got smaller until he disappeared, leaving only his clothes. Spock and Scott had also de-aged and were now teenagers. They quickly placed beta charges on a rock shelf near the Nooaja and ran for safety, now as six year olds, as the blast sealed the cavern.

Outside, McCoy and Kirk appeared with an injectable antidote. Elya and Wenomi asked not to be inoculated. They preferred that their people aged naturally while they figured out how to rebuild their civilization. 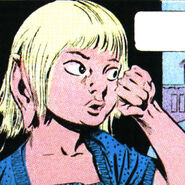 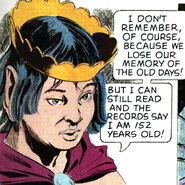 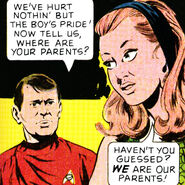 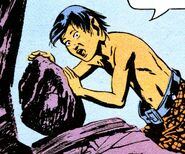 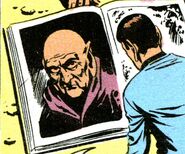 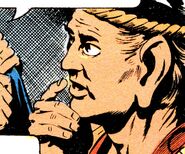 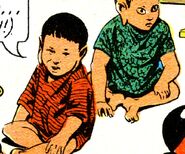 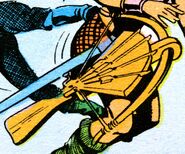 Bow of Many Knives.