Worlds of Deep Space Nine, Volume One: Cardassia and Andor

Worlds of Deep Space Nine No. 1

Cardassia: The last world ravaged by the Dominion War is also the last on which Miles O'Brien ever imagined building a life. As he joins in the reconstruction of Cardassia's infrastructure, his wife Keiko spearheads the planet's difficult agricultural renewal. But Cardassia's struggle to remake itself—from the fledgling democracy backed by Elim Garak to the people's rediscovery of their own spiritual past—is not without opposition, as the outside efforts to help rebuild its civilization come under attack by those who reject any alien influence.

Andor: On the eve of a great celebration of their ancient past, the unusual and mysterious Andorians, a species with four sexes, must decide how much they are willing to sacrifice in order to ensure their survival. Biological necessity clashes with personal ethics; cultural obligation vies with love—and Ensign Thirishar ch'Thane returns home to the planet he forswore, to face not only the consequences of his choices, but a clandestine plan to alter the very nature of his kind. 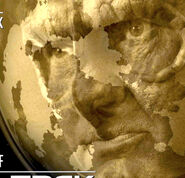