Worlds of Deep Space Nine No. 2

Trill: They are a people with secrets. For centuries they kept their true nature hidden, even taking disturbing steps to protect the small population of near-immortal symbionts with whom a privileged few Trill are joined, body, mind, and soul. They are a people who hold memory to be sacred, yet deny their own past. Now amid a a whirlwind of scandal, accusations, and growing civil unrest, Ezri Dax must penetrate millennia of lies and deceptions, and rediscover what should never have been forgotten, before her civilization rips itself apart.

Bajor: The honeymoon is over. Following the euphoria of Bajor's marriage to the Federation, the real work of making that union work has begun. But even on a world where politics and religion are intertwined, conflicting visions of Bajor's role in the interstellar arena divide the planet's leadership. As newly minted Captain Kira Nerys sets the tone for the kind of Starfleet officer she will be, First Minister Asarem makes a bold move to define Bajor's voice in the Federation, while the returned Benjamin Sisko prepares for a future that only he, as yet, can see.

Following the parasites crisis, the Federation Security Council debates how to respond to the Trill government’s conduct and whether the planet should be allowed to retain Federation membership. Dax leads a team to Minos Korva to locate and destroy the parasite nest that infected Shakaar Edon months earlier. Though the site is abandoned, they find a shard from a Kurlan naiskos. Dax is called to the Trill homeworld to testify before the government. A concerned Bashir insists on joining her though he feels increasingly distant from her personally and professionally. They find a world in turmoil, with multiple groups actively protesting the government. Some demand government accountability for its centuries of secrecy, others want to end symbiosis, while still more call for it be available to all, not just the elite (the suitability for joining of nearly half the population has also become common knowledge). The vast unjoined majority (essentially second-class citizens) are tired of aspiring to symbiosis their whole lives only to be denied symbionts. The protests escalate to riots and the main government building is breached. Senator Rylen Talris is captured; both host and symbiont are killed before the terrorists are repelled. A bomb is found and disarmed, but General Cyl’s forces learn that more are hidden across the planet.

Bashir is sent to help at the central hospital while Dax and Cyl travel to Mak’ala. The symbionts agree to meet with Ezri but only deep within the pools, so she dons an EVA suit and descends. She encounters several 2-meter long symbionts who are thousands of years older than any known symbionts, but finds that they are only caretakers to even more massive (30-meter) and ancient (20,000 years) symbionts called the Annuated. They share with Dax Trill’s most ancient and buried memories, stretching back to the Stone Age. The long-ago symbionts enjoyed temporary bonds with animals, enabling them to explore beyond their pools. Humanoids observed how the joining strengthened both beings and tried it themselves. Dax learns that Trill had spaceflight capability as long as 5,000 years ago, and that they established a joined-only colony on Kurl. This new civilization (the source of the many-voices-within-one-being Kurlan naiskos) endured for several centuries until a virus afflicted the population. Kurlan scientists used genetic engineering in attempts to cure the virus and to improve symbiosis (such as relocating the point of contact directly to the humanoid brain stem), but their decades of effort caused terrible mutations. The virus grew stronger, leading to widespread infection and insanity, and the symbionts evolved into the parasites, seizing control of the hosts rather than sharing their consciousness. The homeworld’s containment squad ultimately eradicated the colony, killing 4 million with biogenics and incendiaries. A few symbionts escaped to return their memories to the Annuated and some parasites survived to plot their revenge. Authorities completely covered up the Kurlan genocide; witnesses were killed and the very existence of the colony and even of spaceflight were stricken from all records. Dax prepares to deliver her knowledge to the surface but her EV suit is low on air.

Meanwhile, multiple bombs are detonated in population centers and at symbiont pools worldwide, releasing neurogenic radiation that servers the link between host and symbiont. Thousands are killed or injured by the blasts; many more hosts and symbionts die when the radiation severs their link, and many symbionts in the pools die. The symbiont population is reduced to less than 10 percent. Without authorization, Bashir uncovers buried research of a drug that can sever symbiosis without killing the host—the authorities fear that the drug would enable mass short-term symbiosis, further threatening to make symbionts a black market commodity. However, the Trill doctors agree to use the treatment in order to save as many lives as possible.

At the caves, Taulin Cyl’s symbiosis is undone by the neurogenic blast. Mortally injured, he dons an EV suit to rescue an overdue Ezri and to return the Cyl symbiont to the pool’s depths. He meets her halfway down, exchanging his air supply for hers before releasing Cyl and ending Taulin’s life. Dax is delivered to the surface by Memh, one of the middle-aged symbionts who was actually involved in ending Kurl. She confers with Trill President Lirisse Maz, who is forced to reconsider many important aspects of their culture. Maz issues an indefinite moratorium on all new joinings in order to allow the symbionts to repopulate. The few surviving joined will be allowed to live out their hosts’ lives, after which the symbionts will be returned to the pools rather than reimplanted. With an ultimate end to joinings, the humanoid society will equalize. Maz even uses Bashir’s treatment to prematurely end her own joining without dying, setting an example for the rest of Trill. The population overwhelmingly embraces the new policies, and the TSC will enjoy a new era of symbiont research by communicating with Memh and the Annuated; their whole society will be reborn.

On their way back to DS9, Bashir and Ezri take stock of their handling of recent events and of their whole relationship. He feels less important to her since her switch to command, and she fears that his latent love for Jadzia was a poor foundation for their bond. Growing in different directions, they agree to end their relationship.

Trill symbiosis goes back 25,000 years, but humanoids and even the young symbionts have long since forgotten their genesis, or even understand symbiont reproduction. Only the Annuated, which Trill society was unaware of, remember.

The Gard symbiont is thousands of years old, but even it has forgotten its earliest hosts. All of Gard’s lifetimes have been spent secretly monitoring and eliminating aberrant joinings. The screening process for Gard’s hosts is more stringent than most, given his eternal dark mission; each host must agree to the responsibility, and one host candidate who refused was likely eliminated for knowing too much.

The treatment Bashir discovers, created by Dr. Bethan Roa, comes from The Lives of Dax: Jadzia—Reflections.

Lt. Commander Ranul Keru is working as a Guardian to the symbionts at Mak’ala, following the tragic loss of his partner Sean Hawk (ST:FC). He is crucial in repelling the rioters at the caves, and the experience makes him reconsider Starfleet and his role within it. Formerly a scientist on the Enterprise-E, he will later be posted to the USS Titan as security chief.

The capital city of Trill is Leran Manev.

Minos Korva, once a Cardassian target, is now a key staging area for Federation relief to the decimated Cardassian Union. 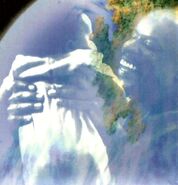