The Return of the Worthy

3040.2
"Worldsinger" was a comic book story published by DC Comics in 1991, the 16th issue of their second series of TOS comics. It is thus far the only published Star Trek story written by J. Michael Straczynski. In this story, the USS Enterprise studied the final hours of a collapsing planet.

It's a tale of a dying world and an evacuation, handling by the Enterprise. But... one man does not want to leave. Why?

The USS Enterprise orbits Theta VII, once a lush world inhabited by five million humanoids that will shortly collapse like Psi 2000 in 2266. Federation teams have already evacuated the planet, but as Spock continues his scientific studies, he picks up a solitary lifeform reading on the surface. James T. Kirk, Spock and Leonard McCoy beam down to rescue him, but he refuses.

Rell is a "worldsinger", a unique member of his species who can empathically absorb the history, culture and essence of his planet and civilization. His life's purpose is coming to an end, and he is ready to die with his planet. Through telepathy he shares some of his knowledge with the landing party so they will understand his wishes. Not wanting him to commit suicide, Kirk keeps him company while Spock and McCoy return to the ship. Moments before gravitational fields collapse the planet, Kirk asks Rell to trust him — Kirk has found him a new purpose.

Captain's personal log, stardate 3040.2
Initial five-year mission. Data-crystal program start : We've achieved low-altitude orbit around Theta VII.
My God, it's a mess down there...
... Ecosystem's collapsing, tectonic plates colliding, internal stresses ripping it apart at the seams...
... In a few hours, it'll be dust.
Five million people to evacuate in three years! I wasn't sure even the Federation could pull it off.
Glad I'm not down there. Glad no one is. It's got to be Hell…

Captain's log, supplemental.
The records of this world told us everything-- and nothing.
In my travels I have seen places of great beauty-- but none to rival the tragic magnificence.
We saved its people and now abandoned, it awaits death.
Do we have the right to take him away?
I have to believe that we do. Life is too precious to throw it away, even on so moving a cause.
What were they like, I wonder?

Captain's personal log, supplemental
Have rendezvoused with the Copernicus at Ramedes III, and turned over our special guest to their care.
She's a science vessel, one of the best. A fine crew. He'll make a good addition.
I'm told he's already started.
Ramedes III. Another dying world. They'll take all the readings. But Rell will get what their sensors could never find.
The smell of the wind, the scent of the soil, the cycle of life and death.
He'll touch the planet, learn its song... and the songs of all other worlds, alone and soon to be forgotten, swallowed by silence.
He'll learn their songs. Record them for generations yet unborn and they'll live on. 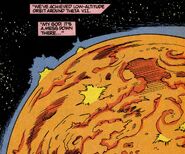 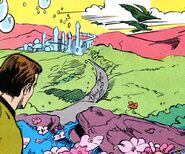 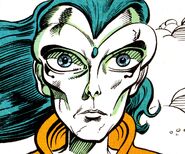 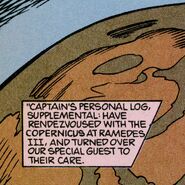