2270
Year Five, Issue 1 is the first comic issue of the Year Five miniseries, published by IDW Publishing. It was released in April 2019.

The crew of the USS Enterprise left Earth four years ago. They've traveled to strange new worlds, defeated impossible foes, and made universe-changing decisions. But now, with the end in sight, they'll have to face their biggest challenge yet. Step aboard the Enterprise with Kirk, Spock, Bones, Uhura, Sulu, Scotty, and Chekov as they begin the end of their original five-year mission and boldly go into an uncertain future in this new continuing Star Trek series!

As the USS Enterprise hurls towards its fate, a broken Kirk sits on an empty bridge, mournfully reciting his last captain's log and reciting the oath as a shadowed figure aims a blaster at his head.

Before any of that, the Enterprise arrives at the Lloyd Zeta hypergiant, the largest stellar object that Starfleet has ever detected, and it is due to go supernova in five minutes' time, unleashing a shockwave of gamma radiation that will effectively sterilize any world within ten thousand light years. The Enterprise is here to oversee the operation of the Einstein-Rosen Ouroboros, which will consume the excess energy and form a never ending Einstein-Rosen bridge, while preventing the giant's collapse into a singularity. This is quite literally the most dangerous task the Enterprise has faced and there is no room for error.

With everything in place, Kirk retires to his quarters, reflecting on the four years (to the day) that he's spent aboard his now aging vessel and mourns that their fifth anniversary will be spent elsewhere. McCoy enters with a bottle of saurian brandy where Kirk reveals he's been promoted. When they return to San Francisco, he'll become an admiral. Though McCoy is ecstatic, Kirk is melancholic. He explains it to his friend by recalling his father's collection of books. Rather than reading to his sons however, George Kirk made them memorize and recite them, with Kirk realizing the trick was repeated phrases that stuck in the mind and gave the authors a sense of balance. While it may have been a memory trick to Homer, to the human race, those repeated descriptions became history. And that's why Kirk can't go a day without saying "Captain James T. Kirk of the USS Enterprise." Without that title, who is he?

On the bridge, Uhura picks up a distress call from Lloyd Zeta-9, a Tholian distress call, with Kirk ordering a course set for the planet, in spite of standing orders to remain by the hypergiant.

When the away team beams down into the Tholian colony however, they find it in ruins. Since the Tholians' crystalline biology casts doubt on whether anything will be detected via tricorder, Spock orders the harmonic resonator to be activated. The device quickly picks up the remains of the Tholians… scattered all around, their bodies shattered and… frozen. Such a vicious attack would suggest that the invaders had extreme familiarity with Tholian biology, sending Kirk's mind back to the Iliad, pondering that the Tholian colonists fell victim to a Trojan Horse sent by other Tholians.

The debate is broken by a hostile Tholian attacking the redshirts, its skin, harder than even an Andorian diamond, reflecting the phaser beams. Ordering his crew to distract the alien, Kirk fiddles with the resonator. After Spock breaks his hand punching the attacker, Kirk fires a sonic blast that blasts a hole clear through the Tholian's torso.

As the away team picks up the pieces, Scott calls about a massive starship that has just arrived while the redshirts uncover another survivor… a Tholian child.

Reflecting on these events, Kirk notes they will forever haunt his dreams and how all the pain and strife that resulted from his decisions could have been avoided. Though his crew survived four years, it was the fifth that would truly test them. The weight of the whole galaxy, countless trillions of lives, balanced on the life of the child, and the most dangerous decision of Kirk's career. 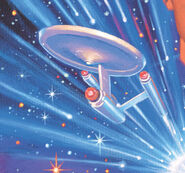 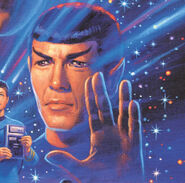 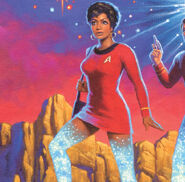 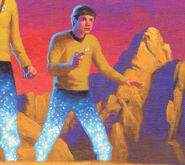 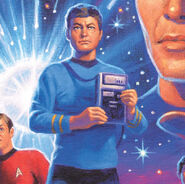 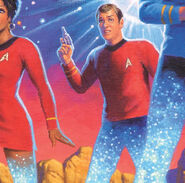 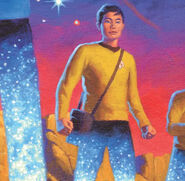