2
Year Five, Issue 11 is a TOS comic, the 11th issue of the Year Five ongoing series published by IDW Publishing.

With the Federation border in sight, a villain revealed will subject Kirk and the crew of the Enterprise to their most dangerous challenge yet—where everything comes to a head in a battle for the fate of the five-year mission!

Although Captain Kirk is out of his coma thanks to the healing waters of Ayal's homeworld, I'Qos, all is not well on the deck of the Enterprise. Spock is still grappling with his choice not to intervene in the I'Qosa civil war, and Sulu and Chekov are still not speaking as Sulu processes losing Ayal. The course is set for Earth, but the Enterprise is on a crash course...

In his guest quarters on Tholia, Gary Seven gets dressed as he reflects on his upcoming mission to cut short the legacy of James T. Kirk, to end the captain's interfering in his dealings with the Tholians. Perhaps, once upon a time, Seven might have felt regret at what he will do, he did once serve with Kirk, but it has been decades for him, even longer since he last felt any regret. Beaming onto the USS Enterprise, Seven cloaks himself as Isis hides under a chair.

Entering the room, Kirk and Spock discuss the latter's stint as acting captain and his first contact with the I'Qosa. While Kirk full-heartedly supports his second's decisions, Spock is rather more critical feeling that he generalized the situation on I'Qos and set the planet back millennia as a result. Despite Kirk's promise that aid will be rendered and Spock praised, the commander nonetheless promises to make a personal protest in his logs about any such commendations. Wearily, Kirk dismisses Spock, followed by Seven and Isis.

In engineering, Montgomery Scott and Nyota Uhura show off Bright Eyes' environmental suit before Seven decloaks and unleashes a toxic gas. Unaffected, Bright Eyes points out the intruder and fires a radiation blast at Seven, disorienting him long enough for the alarm to be raised and the section evacuated and sealed off, though Scott is quite cognizant that suffocation will likely do nothing against Seven.

Indeed, Seven has already teleported to the environmental controls, cutting through a security team and knocking out Pavel Chekov. Noting that it will be painless, he orders Isis to get to work.

In his quarters, Kirk is roused by Spock's warning about Seven before the oxygen levels begin to fall and the gravity shuts off. Unwilling to risk his crew, Kirk gives the order to abandon ship and seek shelter on Circe V, much to the shock of Seven. Leaving Isis to follow the crew, hitching a ride in Spock and Chekov's escape pod, Seven meets Kirk's challenge and beams to the bridge, deciding that Kirk is not Odysseus but all the predecessors of Theseus who couldn't defeat the minotaur, a monster whom Seven gladly takes on the role of. 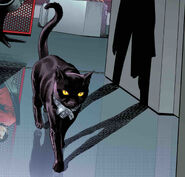