2
Year Five, Issue 12 is a TOS comic, the 12th issue of the Year Five ongoing series published by IDW Publishing.

At last--the moment you've been waiting for since the first page of issue #1! With a villain revealed, a stranded crew, and a ship on a collision course with total destruction, Captain James T. Kirk will have to face the biggest challenge of his life on his own!

As Gary Seven draws his servo, he finds it struck out of his hand by James T. Kirk and the two come to blows, both refusing to deviate from their mission. Insisting that the USS Enterprise must be destroyed, Seven asks Kirk to see the bigger picture. Rising to the pun, Kirk grabs a discarded stylus and jabs it directly into Seven's eye. As the man stumbles back, Kirk offers aid but Seven, long since desensitized to pain, pulls out a hidden weapon and forces Kirk into the captain's chair, ordering him to set the ship on a collision course with Circe V, where his crew is setting up camp.

On the surface, Spock addresses the crew but remains impassive, even in the face of everyone's suggestions before McCoy draws everyone's attention to the Enterprise hurtling down towards them. As Scott and Bright Eyes begin ideas on a jury-rigged transporter before Isis makes herself known, eviscerating the redshirts. The shapeshifter then dons the form of Trespasser once again, though at a much larger size. Though intimidating, all this does is rob her of her mobility and allow Sulu and Chekov to lead a team that quickly pins her down. Making use of one of the escape pods for the parts, Scott and Spock are able to make a transporter with Bright Eyes as the power source.

As the Enterprise begins to burn, Kirk mournfully records his last captain's log and recites the oath before Spock beams aboard. Seven quickly levels his weapon at the Vulcan, the distraction allowing Kirk to strike the blaster out of his hand. Caught off guard, Seven is thrown back by Spock but manages to grab the Vulcan's phaser, thrown loose by the impact. Before he can fire however, Kirk grabs Seven's weapon and fires at the temporal agent, striking hidden machinery under his suit that violently explodes, burning Seven's face. With a glare, Seven grabs his servo and teleports away. Too wounded to stand, he beams down to Circe V to recover the pinned down Isis, telling her that the mission is scuttled but swearing revenge.

With only minutes to spare, Kirk and Spock manage to regain control of the Enterprise, beaming the crew back aboard and finally crossing back into Federation space. However, the threat of Seven remains keen in Kirk's mind and the man himself reflects that he must complete his mission. 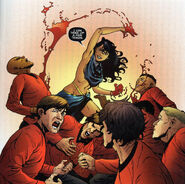 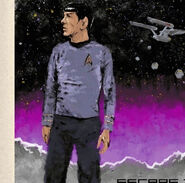