2
Year Five, Issue 16 is a TOS comic, the 16th issue of the Year Five ongoing series published by IDW Publishing.

Election season is in full swing across the Federation, and even though it seems ridiculous, Harry Mudd is rising to the top of the polls! The crew of the Enterprise suspects that there's more to Mudd's game than just wanting to do his civic duty, and their investigation will uncover a rot that threatens the entire Federation from the inside.

At the urging of Attorney General Areel Shaw, Captain Kirk has made contact with the Originalists on Andoria to find out who their candidate for the Federation Presidency is, only to discover that it's Harry Mudd!
As Kirk and Scotty try to figure out what Mudd is really after, Mudd also gets a visit from Gary Seven and Isis, who have their own ideas about his candidacy...

In his quarters on Andor, James T. Kirk worriedly watches Harry Mudd's broadcast, fearing an Originalist victory will bring about a societal stagnation, followed by a period of regression. Though conceding that Shaw was correct in her threat assessment of the Originalists, Kirk's main fear is still Mudd.

In Mudd's quarters, the man meets with Gary Seven who encourages him to run for the presidency, noting that his masters would benefit from the chaos Mudd is sure to create before beaming away. His words prove the wrong choice as Mudd calls in Celia. Kirk was bad enough but with the unknown that is Seven, Mudd has decided to cut his losses and salvage what he can.

In their quarters, Bright Eyes and Scotty discuss Celia and the relationship between organic and sentience. When Bright Eyes draws a link between "programming" and "teaching", the two realize that they can simply smooth-talk Celia into giving them all the information they need. Kirk approves the idea but since Spock and his logical mind refuse to join them, he tasks Scotty to do it.

Speaking of the Vulcan, he is in sickbay but unable to properly inform Christine Chapel of what ails him, she declares him fit for duty.

Smoothing talking Celia, Scotty points out the logical problem that is Harry Mudd. While she is programmed to keep him out of trouble, the man can't help but get into trouble. Convinced, Celia reveals everything.

In the shuttle bay, Renei sees off Mudd, allegedly paying a visit to his ailing grandmother, before Kirk enters, revealing that Mudd has stolen Andorian state secrets and technology, all to sell to the highest bidder. Whipping out his phaser, Mudd holds Renei hostage, mocking the trust she placed in him before Spock steps out of the shadows and applies the Vulcan nerve pinch.

As the USS Enterprise flies away, Kirk defends leaving Celia and Mudd behind as the affair being internal to Andoria. He just hopes that the next Originalist candidate will have a bit more sense.

In her office, Renei promises to her fellow Originalists that she will find a suitable candidate to replace Mudd before Gary Seven returns and suggest a new candidate.

Perhaps, she should run. 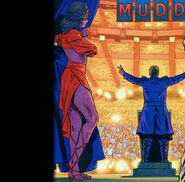 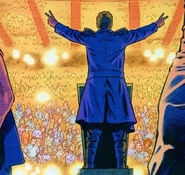 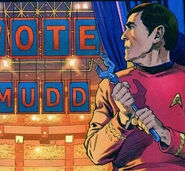 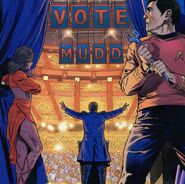